Shares of homebuilder Meritage Homes (NYSE:MTH) popped 15% in the month of September, according to data provided by S&P Global Market Intelligence. The U.S. housing market has shirked COVID-19 pandemic woes and is on a surge, with home sales in August soaring 4.8% to highs not seen since 2006 and home prices continuing to hit new levels.

Meritage Homes is making the most of the housing boom, as reflected in its latest September announcement.

On Sep. 21, Meritage announced a whopping 73% year-over-year jump in total home orders for July and August combined. Meritage clocked an average absorption of six homes per month per community for the two months, nearly twice the level in the comparable period in 2019. Absorption rate is simply the rate at which homes are sold in a specific community during a specific time period.

CEO Steven J. Hilton called it “unprecedented demand”, further elaborating how the company sold more homes in July and August this year than it did “for the entire third quarter of 2019, with strong demand continuing in September.” 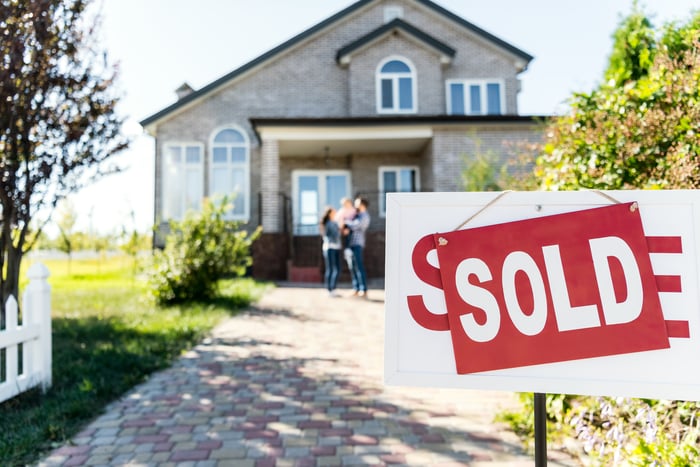 Earlier, Meritage coined May and June as two of its “highest selling months ever”, with home orders hitting a record high of 3,600 during the second quarter. The homebuilder’s second quarter net earnings surged 78% year over year. Historically low mortgage interest rates, tight supply of used homes on sale, and consumer preferences for homes that can accommodate more members in today’s work-from-home scenario are some of the factors driving home sales in the U.S.

Meritage has also been acquiring land at an aggressive pace to keep up with demand, purchasing nearly 6,000 new lots in just the second quarter. In September, the company revealed its plans to purchase a record number of lots — more than 9,000 — this running quarter. That could mean an addition of more than 17,000 lots in total from the beginning of this year until the end of the third quarter. For perspective, the company secured about 18,000 new lots in the whole of 2019.

The sudden spurt in demand and orders for homes in recent months has taken all by surprise. Hilton summed it up during Meritage Home’s second quarter earnings call when he said: “It’s been anything, but a normal spring selling season. I can’t remember another time like this in all my 35 years leading Meritage.”

It remains to be seen whether the resurgence in the housing market is here to stay, but as long as residential construction activity remains upbeat, leading homebuilding stocks like Meritage could run even higher.