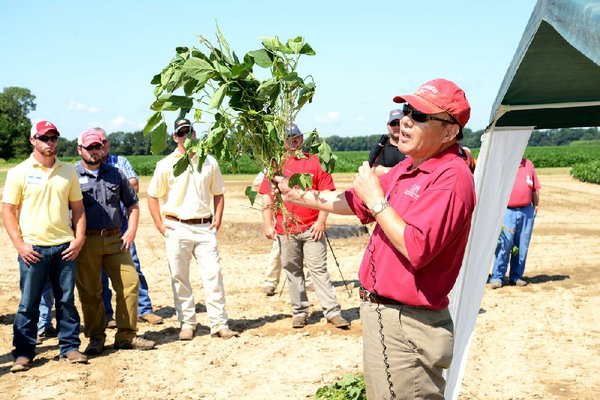 A central question raised by critics of the planned sale of a portion of a state agriculture research station is: Can the land even legally be sold?

The University of Arkansas System board of trustees on March 11 approved the sale of 6,300 acres — or nearly half — of its Agriculture Division’s Pine Tree Research Station just west of Colt (St. Francis County). The sale price, according to the agenda item for the board that day, was for at least $16.5 million, to Lobo Farms LLC in Fisher (Poinsett County).

The Agriculture Division has held the land since 1960, having bought it from the U.S. Forest Service. It developed the 11,300 acres into the Pine Tree station.

The deed, however, states:

“Subject further to the condition that the above-described land shall be used for public purposes, and if at any time said land ceases to be so used, the estate conveyed shall immediately revert to and become revested in the Grantor.” The grantor is identified as the U.S. Forest Service.

In an emailed statement Tuesday, the Agriculture Division said, “The Board of Trustees approved offering the land for sale subject to contingencies. The major sales contract contingency is that title to the land cannot be conveyed without a Congressional waiver of the federal deed restriction.”

In response to other questions, the Agriculture Division said it paid $560,000 for the land in 1960, with the final annual payment being made in 1978.

A recent appraisal of the land set the sale price at $17.64 million, or $2,800 an acre. Lobo Farms, which was the only bidder, also is to make a $1 million payment to a wetlands and waterfowl conservation endowment. Its registered agent, Mark “Field” Norris Jr. of Memphis, has so far declined, through an attorney for the group, to identify the other investors.

By acreage, Pine Tree is the division’s largest research farm, but the 6,300 acres marked for sale are heavily wooded and wet and not useful to the research being conducted on rice, soybeans and other crops elsewhere at the station, UA has said. Proceeds from the sale would fund a variety of current and new research programs, the UA said.

The 6,300 acres also include a 22.5-acre camp once operated by the Division of Youth Services of the state Department of Human Services as a rehabilitation facility for troubled youth. The youth camp was closed last December, and the department then abandoned its lease for the property.

In paperwork related to the sale of the 6,300 acres, the UA system described the former camp as having “modern improvements, including dormitory living quarters, classrooms, administration building, kitchen/dining hall.”

“Because we do not have the resources or mission requirements to utilize the facility, we made buying the 22.5-acre parcel a condition of sale,” the Agriculture Division said Tuesday, adding that it spends about $1,100 a month to “mothball the facility.”

Sen. Ron Caldwell, R-Wynne, whose district includes the Pine Tree station, has said he opposes the sale to a private entity and wants to find a way to keep it in public hands, including possible legislation next year when lawmakers convene in regular session. Caldwell told the Democrat-Gazette last week that the FBI had talked to him about the sale, but he declined to characterize its interest.

The Division of Agriculture said last week that Mark Cochran, the UA system’s vice president for agriculture, had called the FBI to pledge cooperation and to welcome any questions.

Cochran followed that up with a visit on Friday, the division said Tuesday.

Opposition, or at least concern about the sale, was sparked by hunters and anglers, primarily through social media. The state Game and Fish Commissioned has been managing the 6,300 acres since 1999, keeping it open to the public for hunting, fishing and other activities.

“We need to find a better solution,” said James Brandenburg of Bentonville, chairman of the Arkansas chapter of Backcountry Hunters and Anglers. “We don’t mind a sale, but it needs to remain public land, open to the public.”

Brandenburg also noted the language of the deed. Whether or not the Forest Service wants the land back is immaterial, he said.

Brandenburg’s group has established an online petition against the sale. More than 1,600 people had signed it as of Tuesday.

Brandenburg said he had scoured the Internet and other sources for history on the UA land. He said it was first acquired by the federal government in the 1930s “to improve the lives of poor farmers by moving them from unproductive land to better land for farming.”

The federal government held the land, and improved it, until the 1960 deed to the UA system, Brandenburg said. He said the UA stands to “reap a huge profit” from the sale of land that taxpayers, in general, and hunters and anglers, through permits and fees, helped pay for.

“We respect the University’s desire to continue to do good work that benefits the citizens of the state, but we reject the notion that privatizing public lands and waters is the way to fund that work,” Brandenburg said.

The Division of Agriculture said it has shared some costs with Game and Fish in the joint venture of keeping hunting and fishing grounds open to the public. Citing an example, the division said the two entities shared the $35,400 cost in 2016 of improving 1.3 miles of a gravel road to a reservoir and boat ramp.

“Any other investment would be part of an occasional research project, aside from removing some felled trees and beaver dams,” the division said.

The division also said Tuesday that it previously has obtained a congressional waiver similar to what it needs for the Pine Tree sale.

In 1996, the UA division said, it obtained a waiver in that year’s federal Farm Bill allowing the transfer of a small parcel to the White Oak Cemetery Association, in Washington County. The parcel was part of 3,185 acres obtained by the UA in 1953, for what is now the division’s Savoy Research Complex for swine, beef and poultry research.

The waiver was arranged through the offices of the U.S. secretary for agriculture and then-U.S. Sen. Dale Bumpers, the division said.

“This is the same procedure we are pursuing for Pine Tree,” the division said, adding that such waivers “are not uncommon.”