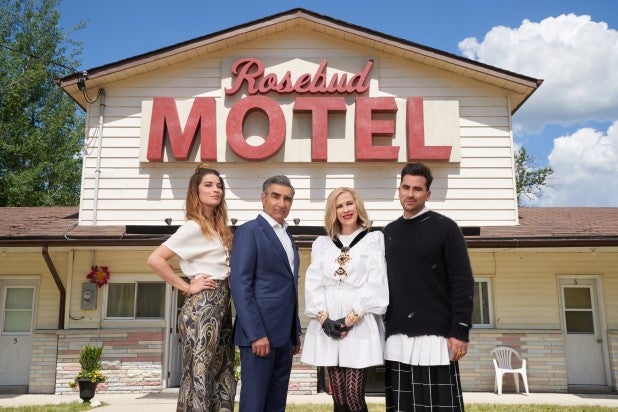 Ohmygod! The motel featured in “Schitt’s Creek” is going up for sale next month, its owner says.

Jesse Tipping, the owner of the real-life Rosebud Motel in Hockley Valley, Ontario, told CTV News that he will be listing the 20-acre property and its motel, which features 8 apartment-style rooms and a three-bedroom unit. The property sits on eight acres of the Nottawasaga River and lies about 55 miles northwest of Toronto.

The property was used as set for the 2005 Viggo Mortensen thriller “A History of Violence” and more recently the TV shows “11.22.63” and “The Umbrella Academy.” Tipping purchased the property in 2011 knowing it was been used in productions and listed in filming databases.

Also Read: Dan Levy Says Half of ‘Schitt’s Creek’ Emmys Party Attendees Had to Be Uninvited at Last Minute (Video)

Tipping, who is the president of the Athlete Institute Basketball Academy and Orangeville Prep, told the Orangeville Banner that he intially used the motel to house basketball prospects.

A few years back, a location scout called Tipping and asked if they could shoot a pilot for a comedy there. For the next six years, the cast and crew of “Schitt’s Creek” would film for a month on the property.

“I’m emotionally invested in this show. I’ve loved watching it since episode one since I got to meet them and even just hear the name of what it was going to be called, it was fantastic,” he told CTV.

In the show, the Rosebud Motel derives its name from the surnames of  co-owners Johnny Rose (Eugene Levy) and Stevie Budd (Emily Hampshire). It served as the home of the Rose family after they lost their fortune due to tax mismanagement and were forced to move into the fictional town of Schitt’s Creek.

Tipping says there have been lots of drive-by visitors to the motel (rooms are not available for rent). The show’s recent sweep at the Primetime Emmys had lead to a massive uptick in visits.

Tipping also said he hopes the new owners will turn it into “Schitt’s Creek”-themed motel. He has not disclosed the listing price.

It was anything but a by-the-book night

As is typical at the Emmys, Sunday’s winners ranged from the woefully expected to the pleasantly surprising. Here’s our list of the biggest snubs and surprises.