BOULDER CREEK, Santa Cruz County – At the top of a cul-de-sac lined with burned homes, Antonia Bradford stood before what was once her cathedral-like house, surrounded by singed redwood trees. Little was recognizable in the rubble but a charred car, a chicken coop, a butterfly-shaped chair and a bathtub.

When the CZU Lightning Complex fires ripped through the Santa Cruz Mountains six weeks ago, Bradford, her husband and five children were suddenly homeless — along with thousands of others. Her family stayed in a hotel, then with friends as they scoured for rentals, watching listings disappear and prices rise.

When lightning sparked the CZU fires in mid-August, around 60,000 people – 1 in 5 Santa Cruz County residents – evacuated. The blaze destroyed 925 homes and three multifamily residences. The fire affected some of the most affordable housing in the county, adding pressure on an already costly and competitive market amid a statewide housing crisis. With the Glass Fire raging in Wine Country, a similar dynamic might play out in the North Bay, where thousands of homes are threatened.

The sudden need for housing was worsened by the pandemic limiting shelter capacity. Complicating it further was that the county had never dealt with a fire on this scale.

Meanwhile, a government-run program booking evacuees free hotel rooms got off to a bumpy start, officials and residents said. In one case, a couple with health issues slept in a friend’s abandoned trailer before they learned about the program. In another, a nurse only got a room when she no longer needed it because the evacuation had lifted.

Most hotel booking issues have been ironed out, but the program is a temporary solution and finding more permanent housing won’t be easy. As of Wednesday, 853 people were still in hotels. After evacuations lift, evacuees can stay longer if their home doesn’t have water or power, which are still out in some areas. And many people don’t have a home to which they can return.

For insured homeowners, coverage helps pay for temporary housing — either in a comparable place for up to two years or a capped dollar amount, as in Bradford’s case. As an underinsured homeowner also juggling paying a mortgage and rebuilding a home, she’s concerned funds will run out quickly if she’s not careful. 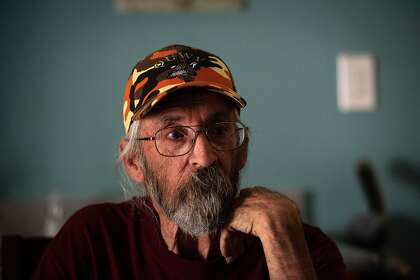 Buzz Tatro, a 74-year-old caretaker and handyman, escaped his Bonny Doon home of 54 years with just a backpack of medical supplies, driving between walls of flames. He got into a hotel after nine days in a shelter. But the throat cancer survivor who can’t speak and writes to communicate now needs to find a permanent place to live on a monthly disability income of $706 after losing a workshop full of tools. He didn’t have insurance.

A wildfire like the CZU kicks into gear local, state and federal agencies offering a complicated web of resources for people like Tatro. On Aug. 22, the Federal Emergency Management Agency declared a major disaster in Santa Cruz and San Mateo counties and descended on the area to accept aid applications. The Red Cross distributed food and gave out one-time $450 grants.

The county started enrolling people in a state program that booked and paid for rooms at 178 hotel properties, funded by FEMA.

“The county was very quick in understanding that our response was needed. It was truly just our first go at all of this,” said Laurin Burton, the county’s hotel program manager. “It was a really big learning curve.”

Burton said challenges included staffing the program, making the public aware of it, and booking rooms closer than the Bay Area. Officials did have success with the Chaminade Resort and Spa in Santa Cruz, which partnered with the program three weeks ago to block off 115 rooms at half the usual rate. 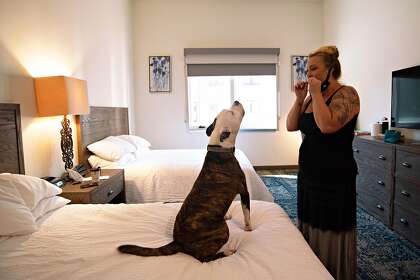 Brittany Provinzano, who evacuated Boulder Creek with her boyfriend and 12-year-old son, paid nearly $1,600 out of pocket at two hotels before learning about the program. Once in, she bounced between four more hotels as her son, who is autistic, started distance learning. Provinzano was grateful, but said it was “really stressful” to re-coordinate with Red Cross to get food delivered every move and in some cases stay far from resources at home.

“A couple of nights I was in tears because I couldn’t do it anymore,” said Provinzano, who returned to her smoke-damaged home last week.

Sometimes frequent moving was in part due to the fact that bookings were good for a week and then had to be renewed. Last week, the state extended reservations to 14 days for evacuees who need more time to secure longer-term housing, spokeswoman Jennifer Iida said.

The program will last for 30 days after the federal disaster declaration is lifted, a yet unknown date, FEMA said.

“We know that the hotel system is merely a Band-Aid on a much bigger wound, and we have to figure out a way of getting longer-term housing to become available,” said Boulder Creek evacuee Rebekah Uccellini-Kuby, who along with 20 volunteers organized a grassroots group that has helped hundreds of fire victims connect with aid and housing. “We are in a West Coast housing crisis and it’s only getting worse by the day, the more fires and fire evacuees. It truly feels like we’re going to be climate refugees soon.”

Losing nearly 1,000 homes will put pressure on an already extremely tight housing market in the area. Santa Cruz County was the seventh-least-affordable metropolitan housing market in the country last year, with average rent of $2,348, according to a federal report. The report forecast current construction couldn’t meet demand by 2022. There were already more than 2,000 homeless people in the county last year, according to an annual survey.

Some of the county’s most affordable housing was in the mountain towns that burned, said Morgan Lukina, board president of the Santa Cruz County Association of Realtors. Fortunately for fire victims, UC Santa Cruz, the largest employer in the area, is primarily remote because of the coronavirus, which eases rental demand since not all students are living nearby, she said.

Robyn Kissler, her partner and her adult daughter lost their Boulder Creek home and landed in her sister’s house in Carmel Valley. Kissler, who manages the post office in Scotts Valley, is commuting at least three hours a day while they look for a closer place. Insurance will pay, but options are dwindling, she said.

“It’s devastating. We got out with just the dogs and a change of clothes. Our whole lives were in that house,” she said. “We’ve been watching the prices go up on rentals, and they’ve become fewer and further between.”

There have also been complaints about gouging. The Santa Cruz County District Attorney’s office is investigating three hotel and two rental price gouging complaints and expects to see more for rentals, said Shandra Handley from the consumer fraud unit.

Navigating aid isn’t always easy. To help cover rising costs, people who lost their homes can apply to FEMA to get a grant up to $35,500 for temporary housing relief, home repair and replacement, but the paperwork can be a challenge for those who’ve just had their documents burn.

FEMA doesn’t duplicate insurance benefits, so homeowners, including Bradford and Kissler, were denied until they prove insurance won’t cover all costs. Spokeswoman BrianaSummer Fenton said the most common reason for a denial, which can be appealed, is missing documents. Still, FEMA has disbursed $3.9 million and 4,800 evacuees have registered for the aid in Santa Cruz County from Aug. 22 to Sept. 29, Fenton said.

FEMA has also provided trailers to people who lost their homes in previous wildfires, such as the Camp Fire. Santa Cruz County has requested those trailers from FEMA, but is waiting to hear back, said county supervisor Ryan Coonerty.

Two weeks ago, county supervisors also passed a measure to let residents apply for temporary permits to return to their property in a trailer or other shelter after hazmat removal is complete, which will take about six weeks. The permit will require power, water and a septic system. Coonerty said people are already staying on the undamaged properties of friends or family members without permits.

“We’re trying to be flexible, understanding people have to get their lives re-established,” he said. “We were in a housing crisis before this occurred.”

The county is looking at other possible housing solutions, including dorm-style apartments and negotiating with leasing agencies to try to get a lower set rate for fire evacuees, Burton said. 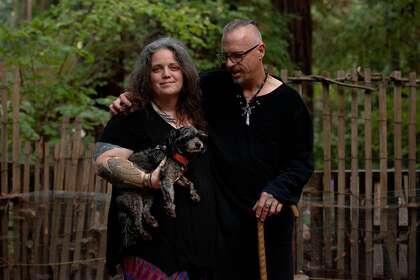 Boulder Creek evacuees Daniel and Melinda McNutt, who bounced among five different spots while evacuated for a month, can stay in their undamaged rental home another year, but wonder how long they can afford it. The formerly homeless couple planned to move to Oregon for cheaper housing – until that state also went up in flames.

“There’s already a housing crisis and they’re burning us out,” Daniel McNutt said.

Others are wedded to staying put despite the challenges: Bradford found an affordable rental in Boulder Creek to move into Saturday.

“I’m not giving up on these mountains,” she said.