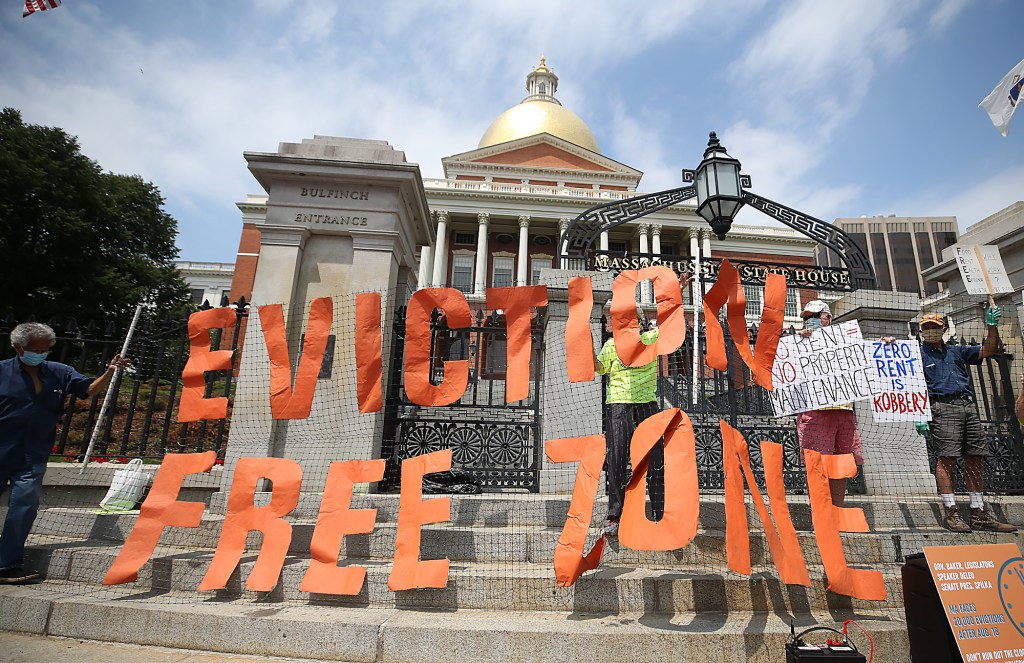 “I think this affirms the principle that we as legislators are protecting the public health when we act to ensure housing stability during a pandemic,” state Rep. Mike Connolly, D-Cambridge, told the State House News Service at the time.

For those renters’ advocates, it doesn’t matter if further relief comes as a directive from the governor or from lawmakers, as long as some action happens quickly.

Supporters have applied pressure on the Legislature to pass a bill that would not only continue to ban evictions, but freeze rents for a year past the end of the COVID-19 emergency.

While Massachusetts kept a lid on coronavirus cases over the summer, the infection rate has accelerated over the last few weeks, a presage perhaps of a second surge of the virus this fall and winter.

Advocates warn that occurrence, coinciding with the sunset of renters’ protections, could lead to anywhere from 20,000 to 80,000 evictions in the midst of a resurgent pandemic.

“Many of us can’t pay rent because we haven’t been called back to work,” said  Chelsea resident Rosa Lidia Godoy, one of more than a dozen people who rallied outside the Statehouse and joined a virtual press conference last week to press for passage of a bill known as the Act to Guarantee Housing Stability.

That bill was filed in the House by Housing Committee Co-Chairman Rep. Kevin Honan, D-Brighton, and Connolly.

Honan told the News Service that the Housing Committee voted on the bill Wednesday, and that legislative leaders were in active talks with the Baker administration and the judiciary about how to proceed.

The bill did clear the Housing Committee, and was referred to the Joint Committee on Rules. It would then hopefully advance to the House Ways and Means Committee for possible amendments.

Honan said he didn’t know what would happen if a deal can’t be reached by Oct. 17. “We’re having discussions. This is unprecedented, due to the nature of this crisis. We’re in communication and that’s a good thing,” he said.

With another stimulus bill still deadlocked in Congress, it’s doubtful whether any further funding will be forthcoming anytime soon, if at all.

Any extension of the eviction ban must also include some relief for landlords, especially the mom-and-pop variety; they also have financial obligations.

Something’s got to give. Obviously, for many, their economic prospects haven’t materially improved since the onset of this pandemic.

And it looks like solving this conundrum will be the Legislature’s call.