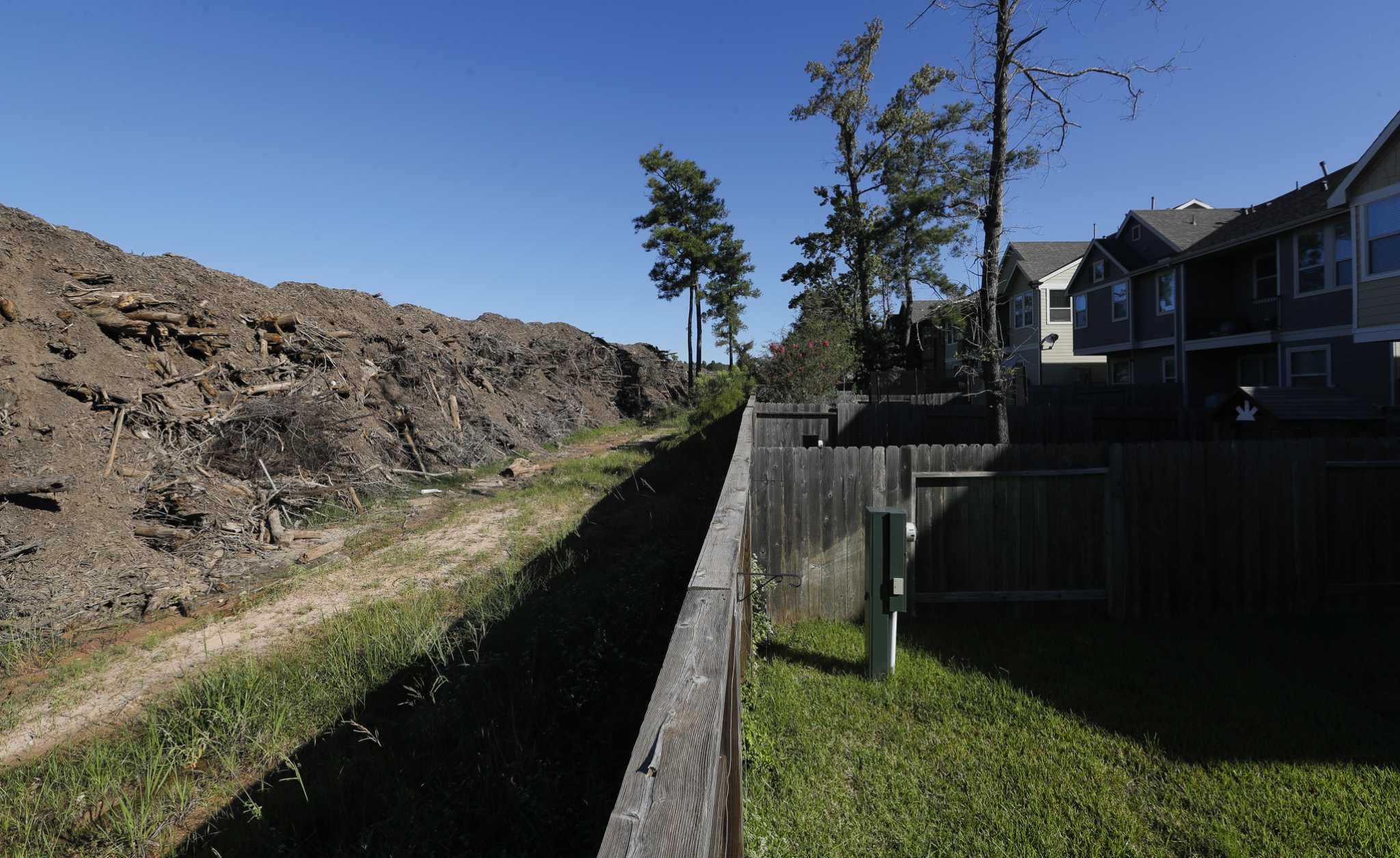 Montgomery County has filed a lawsuit against a land clearing company that has built a massive wall of debris reaching 25 feet high and spanning more than six football fields in length behind a townhome development in Woodforest creating a safety hazard and a rodent and roach infestation for homeowners.

According to the lawsuit filed late Friday, the debris is “being maintained in an unsanitary condition and the neighboring residents have complained of the existence of rodents, snakes, and other disease carrying pests emerging from the piles. Defendants have been observed burning the wood waste at the Property for their unauthorized wood processing and mulching operations. Defendants do not have the requisite permits or financial assurance required by the State to operate a solid waste, wood processing, or wood mulching facility at the property. Further, the piles of refuse and wood waste create an extreme fire hazard to the residents in the neighboring community and subdivision as the piles are mainly comprised of combustible materials.”

The lawsuit seeks immediate injunctive relief to prohibit any further dumping or burning on the property and gives Barrera and Hasara 90 days to remove all the debris on the property. If they fail to meet that deadline, the county will take control to abate the property.

Precinct 2 Commissioner Charlie Riley said he has been aware of the issue on the property where Hasara dumps debris cleared from land for development for about two years. However, about two months ago, Hasara built the massive wall within feet of the homes along Biltmore Loop.

“He is not doing anything with it other than piling it up,” he said. “If that were to catch on fire, if it doesn’t burn everything down it will smoke them out for about six months because you can’t put it out. It has to be physically torn apart to put that kind of fire out.”

Fire Marshal Jimmy Williams said his office was made aware of the issue several weeks ago and the safety issue with the massive pile. State law allows the fire marshal to inspect a property for fire hazards and issue orders for the cleanup. He added his office issued Hasara an order earlier this week.

“That is part of what we are doing to work to remedy the hazard and then conducting an investigation on how it became to be in the first place,” Williams said.

District Attorney Brett Ligon said his office is working on the criminal investigations side of the issue noting the actions of Hasara falls under illegal dumping.

“The Great Wall of Woodforest that has appeared behind the Biltmore subdivision came to our attention several weeks ago,” Ligon said. “Environment Health Services did a very thorough investigation that has allowed us to get to the point where we have worked with the County Attorney’s Office on how best to deal with the approximately one million cubic feet of debris.”

Ligon added the issues are both public safety and how to mitigate the issue.

“A lot of that depends on how quickly, how safely and how soon the landowner moves the pile and disposes of the remnants.”

One resident, who asked for her name to not be used for fear of retaliation, said the issue has been a nightmare.

“We have a massive rodent and cockroach investigation and we have never had that before,” the resident said.

The resident, who has lived in the subdivision for about four years, said Hasara has always piled up debris but it was never an issue since it was much further from the homes.

However, she said about two months ago, Hasara began working all hours of the night to push the debris up to the property line of the homes. She believes the act was retaliation after several residents called police after Hasara set some of the debris on fire and it was left unattended.

“We have been involved in previous fires out there,” Williams confirmed.