Monday Mysteries is a weekly series featuring articles previously published in The Independent’s Murder Mysteries publications. Articles will be published on Mondays through October 2020. 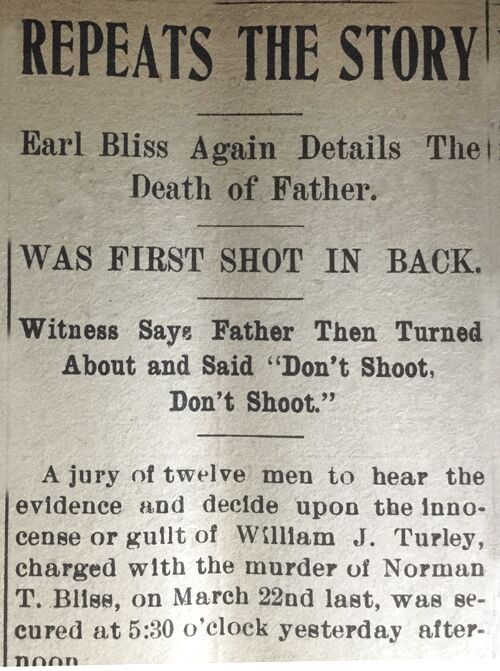 This Independent headline describes the trial of William Turley, which occurred about a year after the murder.

Norman Bliss was finishing chores at his farm near Shelton on March 22, 1903, when he noticed hogs eating corn in his field. They belonged to his neighbor, James Barnhart, and it was not the first time they had been on his property. On several occasions the hogs ventured onto his property while their indifferent owner did nothing to contain his animals.

Bliss and his son proceeded to drive the animals back off their property with pitchforks. In the process of driving the pigs west toward the Barnhart farm, two shoats were killed.

Bliss and his son were returning home when he spotted William Turley, with his son and another boy, headed his direction. Turley had just moved onto the Barnhart farm the day before. When he spotted Turley headed toward him, Bliss went out to meet the man and order him off his property.

A heated argument took place between the two farmers. Bliss attempted to end the exchange by turning his back and walking back to his house. As he walked away from Turley, a shot rang out and Bliss was struck in the back near his shoulder blade. Bliss turned and was met with another bullet, this one striking the right side of his chest, which resulted in instant death.

Turley was charged with murder in the first degree. During the first trial, held at Grand Island in October 1903, the jury ended up with 11 votes to convict for manslaughter and one vote to acquit.

The defense argued that Turley had acted in self-defense because Bliss had charged toward him with a pitchfork in his hands. Turley claimed that when he pulled up his gun, Bliss turned slightly. As a result, the first bullet lodged in his shoulder blade. According to Turley, Bliss continued to charge after the first shot and he fired again to save himself.

The state relied on testimony of Bliss’ son. He stated that his father was walking away, and after the first shot he turned and shouted “Don’t shoot, don’t shoot,” before the second fatal shot was fired.

Witnesses who arrived on the scene after the shooting testified for the state that they saw the footprints from Bliss’s rubber boots leading away from the point where Turley had stood when he fired his gun. Turley’s location was marked by his foot prints and the discharged shells on the ground nearby.

The only witness not related to either the victim or the killer was Eugene Washburn, a friend of Turley’s son. At the first trial, Washburn was not called to the stand by either the state or the defense, even though both had subpoenaed the boy. The defense made a motion for the judge to compel the state to call Washburn to the stand. The state argued that the defense had also subpoenaed Washburn and if the defense counsel wanted him on the stand, they could call him. The judge overruled the motion.

During the argument, the state attorney explained that the boy, who was 10 years old at the time of the shooting, was an unreliable witness. When Washburn testified during the coroner’s inquest, he stated that Bliss had initially come toward Turley. However, when the first shot was fired, Bliss turned around and was walking the other way.

Washburn also told the coroner that after the first shot, Bliss said he would pay for the hogs that were killed, before Turley fired again. Washburn later recanted his sworn testimony when questioned by the state attorney prior to the trial.

Turley was placed on trial again in March 1904. At the second trial, he was found guilty of murder in the second degree and sentenced to 17 years in the state penitentiary.

The attorneys for Turley appealed his conviction to the Nebraska Supreme Court. His sentence was suspended with a $10,000 bond until the high court could hear the appeal.

In their motion to appeal, the defense attorneys claimed Turley had not been a party to the disagreement between Bliss and Barnhart, having just moved onto the property the day before the shooting. They further argued that both Bliss and Turley were well-respected farmers before the shooting occurred. Turley, according to his attorney, did not act out of malice, but rather curiosity over the incident with the hogs. Finally, they alleged that lurid reporting of the incident had tainted the jury pool against Turley.

On Oct. 6, 1905, the Nebraska Supreme Court affirmed the action of the lower court, finding no flaws in evidence or legal procedure. The court stated that although “the deceased was at the time of the homicide guilty of a technical assault upon the accused, it would not be lawful to use more force than necessary for self-protection from that assault.”

The court further stated that since the accused was a trespasser on the property of the victim, it was his duty to retreat, not the other way around, and to “kill the assailant under such circumstances would not be justifiable.”

Get local news delivered to your inbox!