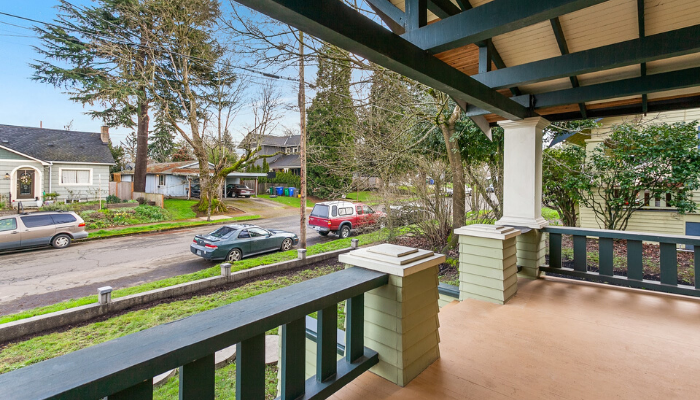 Editor’s note: All of HomeLight’s coronavirus information for buyers, sellers, and agents is available on our COVID-19 hub.

If you’d been planning on buying a house before coronavirus, how has the pandemic changed the homebuying experience? Getting an inspection and an appraisal could be a challenge, and your closing might be delayed. But reading about what could happen is different than knowing what has happened to other buyers.

Here are four stories about buying a home during coronavirus. Each homebuyer faced unique challenges — everything from the risk of water getting turned off in their new home to picking out countertops remotely — and their stories can give you a good idea of what to expect when you’re expecting… to buy a house during a pandemic.

Agent Bonnie Roseman, who works with 82% more single-family homes than the average agent in Portland, Oregon, helped first-time homebuyer Kelly Ogilvie make an offer on February 24. News of the coronavirus had started spreading, and they were getting nervous.

Ogilvie lived in a studio apartment and also rented a studio for her work as a musician, located in a building with common hallways where she had to walk by other people frequently. She wanted to be in her own home if she had to shelter in place.

Despite multiple offers and stiff competition, she won an adorable Portland bungalow. However, the home inspection revealed a problem with the sewer line. It had to be fixed before she could move in, and it needed a city inspector’s sign-off.

Roseman describes the mad rush to bring it all together.

“Friday night, the mayor decided he was going to shut down the city of Portland. We were operating that weekend under the idea that on Monday there was going to be an announcement and scrambling to schedule inspections for Monday.” They squeaked in just under the wire, as the city halted interior visits at 5 p.m.

With the go-ahead to move in, Ogilvie also encountered issues with her down payment and delays at closing. “I took money out for my down payment on a Monday morning, and it was the day the stock market took a big dive,” she says. “It made me nervous; it was very difficult to get a hold of various banks and financial institutions to try to work out the rest of my down payment.”

Everything got worked out, and she was all set to close when there was another snare. The title company gave the wrong transfer information to the bank, so the mortgage company didn’t pay for her home! After closing a day late, she finally moved in, but… the city had gone into lockdown.

Portland Water Bureau removed staff from facilities, and Ogilvie couldn’t get her water hooked up. After phone calls to the previous owner — who emailed the water company — they agreed to leave it on for a week until the account could be transferred into her name.

Despite the hiccups, Ogilvie is thrilled about her new home.

“I feel like I have a lot more resources here. I have space for a little garden and I have space to have a bigger fridge and things like that so I can have more food around, just in case,” all of which makes her feel better right now.

Buying a new construction home with a cross-country move

Michael Frost had moved away from home to go to medical school in New York City, but after several years away, he and his wife, Tracey, decided it was time to move home. But, as essential workers, they couldn’t leave the city. They called on family to help.

Agent Jeremy Kahler has worked in Rapid City, South Dakota, for more than 15 years, selling more homes than the average agent, but this was a first. “They’d had other properties on their list, but they were occupied. They elected to take those off and only look at vacant homes and new construction.”

“When we had Jeremy and my family go look at the houses, we did only choose houses that were empty because we wanted to limit their exposure to other people,” Michael says. They ended up writing an offer on a partially finished spec home.

The Frosts count themselves lucky that they had family members whose taste they trusted to help select the finishing touches on the home. “I actually know Jeremy a little bit and trust his judgement, but having the family eyes on it, too, was also very helpful,” says Michael. Kahler set up video conferences, taking samples out to the property and holding them up in front of the kitchen cabinets so that the Frosts could see how it looked in the kitchen’s lighting.

While they’d been given options for places to shop for countertops, they had to rush some decisions. “Depending on where they were located, the factories were starting to shut down,” Kahler says. “Getting materials and supplies was becoming the issue.”

While picking colors through email has been tough, and buying a house remotely a little nerve-racking, the Frosts are more concerned about the move itself.

“We have family coming to help us,” Tracey explains, “but they might not be able to anymore.”

They also don’t know when travel restrictions will be lifted, though they’re grateful to be moving out of New York City. As of the end of April, they’re waiting to close until the builder has finished.

Buying a home that needed a full remodel

Rapid City, South Dakota, closed down a little later than other cities, and agent Shauna Sheet’s clients were still able to look at homes in person and make an offer before social distancing and other measures went into effect. Her buyers had been living in a small apartment with their three-year-old after relocating back to their hometown.

Luckily, the elderly sellers had already moved into assisted living, which made showing the home and arranging for estimates easier. The home needed updates, and while the kitchen remodel and knocking down walls was optional, radon remediation was not.

While at first they’d planned to meet with workers at the house, there was a change of plans. Sheets would “ping the contractors one-day codes and have them access the house” using the lockbox. “We created everything where no one was in the house at the same time.”

The homebuyers, both pharmacists and essential workers, say that it’s been fun to have a distraction from everything that’s been going on. The wife, Katy, enjoys “going by once a week when nobody’s there, and nobody’s been there for a couple of days,” to respect social distancing. While they closed on April 7, they haven’t moved in yet.

When they had to pick out cabinets, the showroom set up a private appointment. “It was a boutique set-up with us one-on-one with the showroom employee and the entire store empty. They had Lysol everywhere, and they’d been sanitizing a lot, and we had masks on,” says Katy. The contractor communicates with them via text, email, or Zoom.

The only part of the process that Katy found strange was the gradual progression from hugging Sheets at the beginning of their home purchase journey to the twenty-minute closing wearing masks and gloves.

On the plus side? Because few other people are remodeling right now, Katy feels that they’ve had the pick of companies to work with them, and they’ve saved money on many of the repairs.

Buying a home after almost giving up

After bouncing from Washington, D.C., to Dallas, homebuyer Mark had decided to settle down in Portland, Oregon. At first, given the competitive market, he and agent Bonnie Roseman had a hard time finding him a house.

“We’d made a couple of offers that didn’t hit the mark, and I was just about to give up when the COVID stuff started coming up,” he says. He was still touring homes, but “definitely a little more concerned about entering too many homes,” when he walked into one and knew right away that it was his. It had all the features he wanted, and it was close to a park for his dog.

He told Bonnie to jump on it. Given that he’d already sold his D.C. condo remotely, Mark wasn’t too worried about buying his new home the same way. Using DocuSign and other digital tools, everything was completed remotely. According to him, it was an effortless process.

Roseman attended his closing by phone, something she’s had to get used to, as “before COVID I didn’t use Zoom, or anything virtually. Now I do them all the time.”

Everyone involved in the homebuying and selling process has had to adjust to the “new normal” as the coronavirus pandemic unfolds. In some areas, the situation changes weekly, but with the right agent on their side, each of these homebuyers was able to get it done.