Skip to content
FOR SALE BY OWNER
[email protected]_84

Many hotels in Hanoi’s Old Quarter area are for sale due to big losses resulting from the Covid-19 pandemic.

An owner of a hotel chain in Hanoi’s Old Quarters area said that this was the biggest loss for his business to date. Since being affected by the pandemic, his firm has had to suffer losses of around VND10 billion (USD434,782). 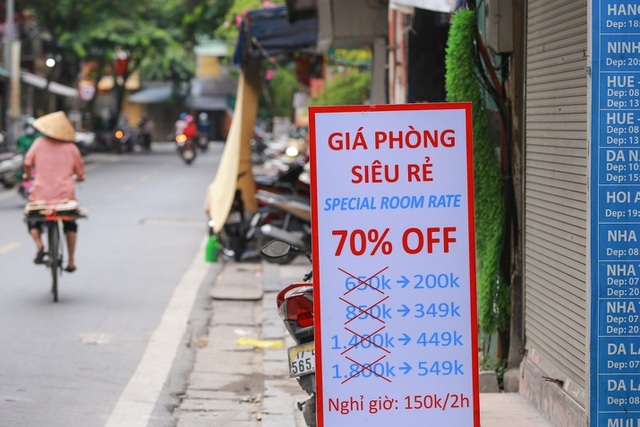 The room price discount of a hotel in Hanoi’s Old Quarter.

Room occupancy rates have plummeted due to Covid-19, in some cases to zero percent, compared to 70-90% previously, he added.

He had to temporarily close two three-star hotels, leaving just one open. He and his relatives take turns to be receptionists and security staff to save costs. Room prices have also fallen by 70% to VND349,000 each.

At present, his hotel often receives a small number of visitors at weekends, he noted.

Meanwhile, another hotel owner Le Xuan Vinh sold his entire eight-hotel chain, sacking 200 staff. He has to pay VND150 million (USD6,521) for each hotel per month in operating costs.

So far this year, he has lost VND20 billion amid the tourism slump, Vinh said, noting if the situation does not improve, he would have to look at other business areas.

One of his difficulties was getting banking loans. “We wanted to use our land use rights certificate as the collateral for the loans, but were refused as his business is in the tourism sector,” Vinh said.

Vu Van Thanh, head of the Hotel Management Department under the Vietnam National Administration of Tourism (VNAT) said that the room coverage of hotels in Hanoi’s Old Quarters is less than 10%, a record low.

The VNAT has proposed measures to help ease difficulties for tourism service providers.

In the first eight months of this year, Vietnam served only 3.8 million international visitors, down 66.6% on-year, the record low for many years.

By August 31, up to 950 tourism accommodation facilities in Hanoi had suspended their operations, making 16,000 people unemployed. The more luxury end of the market has been hardest hit.

Hotels for sale due to COVID-19

The decline in the number of visitors and revenue due to the COVID-19 pandemic has led many investors to sell their hotels.

FOR SALE BY OWNER

The Bristol Press – Mangiafico’s Bakery up for sale, owner retiring

Landmark Laois shop up for sale as owner retires