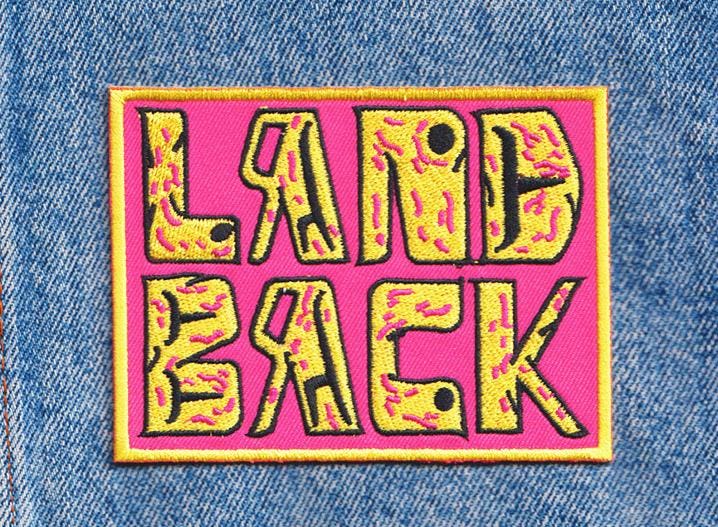 When Katy Grable Gonzalez, 29, beads the words “Land Back” into a pair of earrings to sell she is simultaneously referencing three different land reclamation movements fought by her relatives. On her father’s side, the Yaqui are fighting against a border wall between the Mexican state of Sonora and the Southwestern United States and Native Hawaiians are resisting the construction of a telescope on sacred mountain Maunakea. On her mother’s side, the Huichol have clashed with the Mexican government over mining and drilling operations on their sacred lands.

When the earrings are sold, Grable Gonzalez donates the majority of the proceeds to organizations on the frontlines of the movements for Black lives and Indigenous sovereignty, as well as to the Navajo Nation COVID relief fund. She also transfers funds directly to individuals in need of bail or rent.

“Land Back” was conceived two years ago as an internet meme, which spread online as a hashtag and has taken shape in the physical world as posters, graffiti, hoodies, patchwork and beadwork. It has also become a slogan for land reclamation movements across the Northern Hemisphere, gaining traction during protests against the construction of the Coastal GasLink pipeline in British Columbia on the Wet’suwet’en Nation in February of this year.

“After the RCMP [federal police] raided Unist’ot’en Checkpoint [a protest encampment] last February, there was a lot of action and urgency to get more funds up there and to Gidimt’en Checkpoint as soon as possible,” says artist Whess Harman, 30. Harman designed a “Land Back” patch for sale that raised $3,000 for Unist’ot’en Legal Fund and other organizations. They worked with native DJ and producer group A Tribe Called Red, who wrote and released a free song called “Land Back,” for which Harman’s patch was the cover art.

Artist Joshua Mangeshig Pawis-Steckley, 30, similarly became involved in selling art with the phrase “Land Back” to support the protests on the Wet’suwet’en Nation. “I wanted to help out,” they say.

Started by Canadian memer Arnold Tailfeathers, “Land Back” memes have primarily been focused on criticizing President Justin Trudeau, his policy of reconciliation with Indigenous people, and complicity with pipeline developers. The phrase has been invoked by Land Protectors opposing the construction of major pipelines on disputed land, such as the Coastal GasLink Pipeline and the expansion of the Trans Mountain Pipeline, whose slated construction is being opposed by a group called Tiny House Warriors that re-settled areas along the proposed route. They maintain the Trans Mountain Pipeline cannot cross “unceded Secwepemc Territory.” Since mid-July, a camp named “1492 Land Back Lane” has been resisting planned development in the town of Caledonia, Ontario in defense of Haudenosaunee sovereignty.

And it has spread to the United States. A demonstration at the Black Hills, South Dakota in anticipation of President Trump’s visit to Mount Rushmore in early July featured a banner reading “LAND BACK,” and the phrase was spray painted on a police officer’s riot shield. In an opinion piece for NBC News, scholar and organizer Nick Estes called the graffiti “a poem.” A few weeks ago, members of the Kumeyaay Nation set up “Camp Landback” to resist the construction of a border wall on their ancestral land.

For artists, invoking the meme in their work has allowed them to fundraise as well as to spread the political message. Crucially, the phrase holds different meanings for different people. For Grable Gonzalez, who began selling beadwork and fundraising a few months ago, the need for “land back” is tied to environmental justice. “We can’t have climate and environmental justice without land back,” she says.

“If Canada is serious about reconciliation, that conversation can’t be started without land back,” says Pawis-Steckley.

For artist Heather Stewart, 34, who sells beadwork under the name Heather Sweetgrass, “’Land back’ means a lot more than getting our stolen land back; it’s about acknowledging the destruction that colonialism has brought and how our very culture, our essence, who we are has been completely ripped away.”

Stewart uses her beadwork to fundraise for Missing and Murdered Indigenous Women (MMIW) and Black Lives Matter movements. Recently, she says she’s been working hard to get the statues of Sir John A. MacDonald, who started the Residential School system in Canada, taken down by giving away beadwork to people who sign petitions for the removal of the statues.

“If my beadwork can wake people up or invoke a question as to why a certain piece was made then I know I’m on the right track,” she says.

Although leveraging the meme Land Back can be a successful way to fundraise and raise awareness for ongoing social movements, artists spoke of frustrations as well.

“Sometimes I feel like the message gets a little lost between myself and folks purchasing the work,” says Harman. Selling the work, albeit in order to raise money, makes the transaction “a commodity/capital exchange,” says Harman. But the sentiment they’re working from, and what “Land Back” stands for, is “Potlatching and wealth redistribution.”

“The ultimate goal is sovereignty, and raising funds to support that frontline work is just a piece of a larger picture to protect our ways of subsistence living, traditional knowledges, and our kinship systems and…to repair any pieces of those things that have been damaged.”