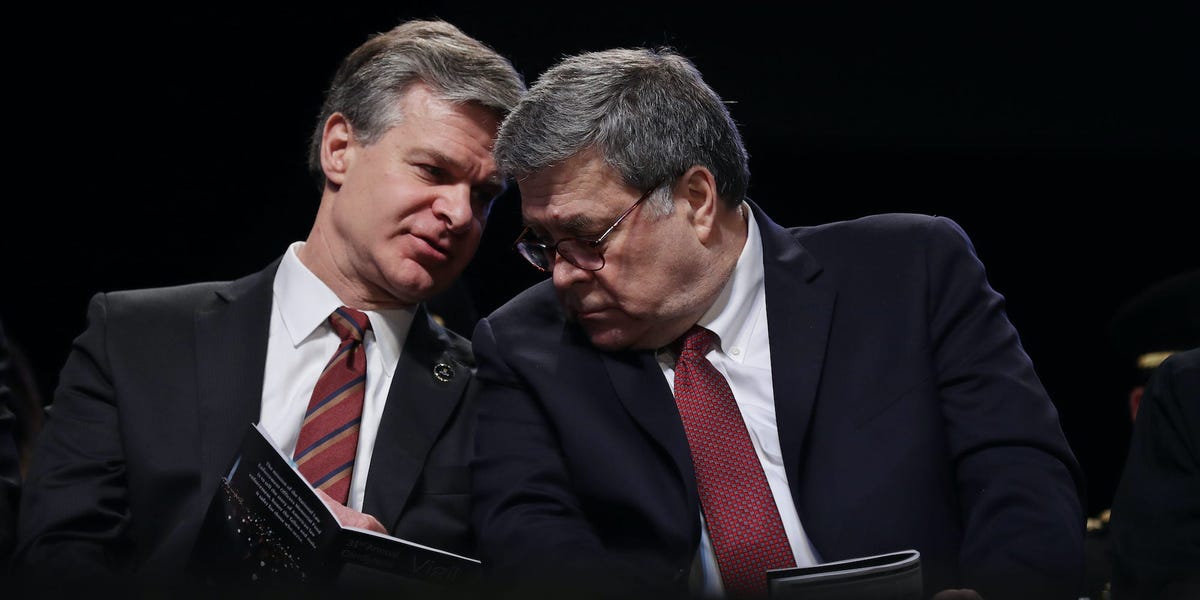 The FBI is hiring a private contractor to help overhaul its policies surrounding a controversial tool used for spying on Americans that has drawn the ire of President Donald Trump.

It’s a move that is prompting concerns about the seriousness of the reforms and the federal government’s ability to protect sensitive information. It also raises questions about whether the FBI has had the internal resources needed to vet its work in the past. In a recent announcement about improving oversight of federal agents’ use of the surveillance tool, the bureau acknowledged a “gap” in its ability to police itself.

Outside firms had until this week to bid on a contract to help revamp the process by which investigators seek permission to use the Foreign Intelligence Surveillance Act to spy on those believed to be working for foreign powers. In the Sept. 23 contract solicitation, the FBI said it “relies extensively” on the 1978 law to collect information as part of investigations into terrorists and other countries’ spying operations in the US.

The FBI, which employs more than 30,000 people across the country, wields significant power to investigate everything from mass murder to government corruption. With that capability comes access to intrusive tools like FISA — which, if misused, can infringe on the civil rights of those targeted by them. Weak internal oversight could also open up the bureau to other accusations at a time when it’s still trying to move on from a series of politically-charged controversies dating back to the 2016 presidential election.

Ultimately, the contractor that gets the FISA job will be tasked with providing a team of eight people who will need to have or acquire security clearances, some top secret and others even higher. The team will design a “robust and exacting audit process” to prevent the FBI from making mistakes in its classified requests to the secretive federal court in Washington, DC, that decides on FISA applications, the solicitation said.

Three weeks before the bureau asked for bids, FBI Director Christopher Wray and Attorney General Bill Barr announced the latest in a series of major changes to FISA practices as a result of problems in past applications, namely those tied to the investigation into Russian interference in the last presidential race. In December, Department of Justice Inspector General Michael Horowitz reported that all four of the government’s applications in 2016 and 2017 to surveil former Trump campaign adviser Carter Page contained “significant errors.”

The president and his supporters have seized on the inspector general’s findings to falsely claim that the FBI’s investigation into possible collusion between members of the Trump campaign and Russia was illegitimate. Horowitz, however, concluded that the FBI had sufficient reason to open the investigation in July 2016, months before the first request to spy on Page and well before special counsel Robert Mueller took over a probe that dominated the first three years of the Trump administration.

“Like many of America’s biggest corporations routinely do, the FBI is seeking objective expert advice to improve its internal processes and procedures,” the bureau said in a statement to Insider on Tuesday.

The solicitation, which was updated this month, says the contractor that gets hired will both analyze how the FBI currently fact-checks its FISA applications and draft a better way of doing so.

Currently, FBI agents who want permission to spy on someone using FISA need to “gather sufficient evidence to establish probable cause that the target is a foreign power or agent thereof,” the solicitation says, and receive “multiple approvals, both in the field office, as well as at FBI Headquarters.” That process also includes getting approvals from lawyers at the FBI and working with attorneys at the Justice Department to write the application.

But the American Civil Liberties Union, which has long criticized the FBI’s use of its spying powers, expressed frustration about the hiring of a private company to work on FISA policies.

“The government is apparently willing to give outside contractors access to FISA information to check the FBI’s work, yet it refuses to give defense attorneys with security clearances access to that information even as their clients face prison,” said Patrick Toomey, a senior staff lawyer with the American Civil Liberties Union.

“When individuals are prosecuted on the basis of FISA information, their liberty and due process rights depend on the ability of defense attorneys to check the FBI’s work,” Toomey added.

A Democratic congressional source who is familiar with the FBI’s operations also raised concerns about how the bureau will safeguard sensitive data related to FISA. “I have no clue how they do this while maintaining privacy and civil liberties of individuals, not to mention classified information including sources and methods,” said the source who requested anonymity to discuss sensitive matters.

The solicitation says the successful bidder will have “[a]ccess to manuals, databases, routine reports, and related materials necessary to perform this contract.” The FBI told Insider that scrutinizing actual FISA applications “will remain internal to the FBI and DOJ,” however, and that the contractor “will not be engaged to perform the FISA auditing itself.”

The contractor will also examine the effect of the nearly four dozen changes ordered by Wray in December to address the inspector general’s report about the Page applications and other parts of the Russia investigation, the FBI said.

“A robust audit program will assist the FBI in ensuring that FISA applications are complete and accurate, and in determining whether the many corrective actions already implemented under the leadership of Director Wray are effective and having the desired impact,” the bureau’s statement said.

One expert has already told the FISA court that those changes aren’t enough, though. In January, David Kris argued that the corrections ordered by Wray dealing specifically with FISA accuracy “are insufficient and must be expanded and improved in order to provide the required assurance to the Court.” Kris, the former head of the national security division at the Justice Department, had been asked by the court to assess the changes.

Since December, Horowitz has expanded his scrutiny of FISA to examine whether the FBI followed proper procedure in 29 applications dating back to 2014. In March, he released a preliminary report revealing that his team had found “apparent errors or inadequately supported facts” in the majority of those applications, which typically deal with everything from suspected terrorists to foreign spies.

The FBI said in July that it had reviewed all 29 applications and “been able to resolve many of the concerns or potential errors identified” by the inspector general. In a July filing to the FISA court, the FBI said it had found “only one material misstatement and one material omission, neither of which are assessed to have invalidated the authorizations granted by the Court in the applicable dockets.”

In September, when Wray and Barr introduced the additional reforms, they acknowledged the FBI’s “gap” in auditing capacity and announced the creation of an “Office of Internal Auditing” to address the shortcoming.

The FBI did not answer questions about that gap. But the congressional source said the bureau’s “audit and compliance regime has been nonexistent for years,” and that the gap was rooted partially in a “we’re the FBI, trust us” attitude.

The September announcement from Wray and Barr received praise from Republicans in Congress who play a key role in overseeing the bureau’s work.

“The reforms announced by the DOJ and FBI are a welcome step forward to address the serious missteps by the Bureau that occurred during the 2016 presidential campaign — mistakes that should never happen again,” Sen. Marco Rubio, the acting chairman of the Senate Intelligence Committee, said in a statement at the time.

“It’s clear that the FBI seriously abused the FISA process in 2016, including omitting exculpatory information, lying to the court, and altering material presented to the court in order to get a warrant,” added Rubio, a Florida Republican.

Rubio’s office did not respond to questions this week about the FBI’s plans to hire an outside contractor to develop a new FISA auditing structure. A spokesperson for California Democratic Rep. Adam Schiff, chairman of the House Intelligence Committee, declined to comment. The offices of GOP Sens. Lindsay Graham of South Carolina and Chuck Grassley of Iowa, senior members of the powerful Judiciary Committee — which also oversees the FBI — did not return requests for comment.

But the congressional source said they weren’t surprised that the bureau had turned to a private firm for assistance. The FBI is known for “waiting until the proverbial s— hits the fan and then throwing money to a company to fix it,” the source said.

‘These changes do not go nearly far enough’

The FBI has declined to say how much money it has budgeted for the contract, but in its statement to Insider said the contractor will provide advice on how to shape the new auditing office.

Already, the bureau has chosen someone to lead the team. Mark Gerber, a retired forensic accountant and former FBI agent who worked in white collar crime, will serve as the assistant director of the auditing office, the FBI said on Oct. 16.

The bureau first revealed that it was interested in outside help to improve its FISA regime in June, as the Wall Street Journal reported at the time. The FBI had posted a request for information — a non-binding initial step in the federal contracting process — to get feedback on “the market for independent, professional firms” with the ability to create a FISA auditing system.

The FBI’s September solicitation is the next step in the process, containing a more detailed description of the work and signaling that the bureau is moving forward with the plan.

“The FBI desires to retain the Contractor’s support to develop its FISA audit process and approach, to include recommending periodic internal audit reviews, audit program procedures, and other matters to ensure FBI leadership that the FBI has developed and implemented a robust approach to timely detection of any variances from the enhanced policies and procedures governing the FISA process,” the solicitation said.

The contractor’s staff will work for approximately 15 weeks out of FBI headquarters in Washington, DC, according to the solicitation, and the team will need to provide both monthly and weekly status reports to the bureau.

Though it’s unclear how a Democratic administration would approach FBI issues if Joe Biden wins next week’s election, Trump has reportedly been considering firing Wray after the race is over and well before the director’s 10-year term is up. Any change at the top could affect how the bureau approaches FISA reforms.

The FBI declined to reveal the number and identities of firms that have expressed an interest in the contract to Insider. But one potential bidder said in a written question to the bureau that the “listed years of experience” the bureau is looking for from the outside experts “may significantly limit competition.”

The solicitation noted in a separate document that the new auditing system that the contractor helps develop — as well as the contractor’s identity — “will likely become public knowledge.”

The FBI did not answer questions about what kinds of plans it has to publicize the contractor’s work.

“Although the FBI’s repeated abuses deserve greater scrutiny, including routine auditing, these changes do not go nearly far enough,” said Toomey, the ACLU attorney, noting the need for defense lawyers to have access to FISA information on their clients.

Oregon Sen. Ron Wyden, a senior Democratic member of the Senate Intelligence Committee, said in a statement to Insider that openness should be a requisite part of the reforms, regardless of who draws them up.

“Whether it’s done by contractors or not,” he said, “there must be transparency and accountability to the FISA court that has demanded changes, the bipartisan majorities in Congress that support far-reaching reforms such as an expanded role for independent experts, and the American public.”