There is already a lot of good research on the fundamentals of Opendoor’s business, so I will not repeat those details in this article. In particular, I recommend this Seeking Alpha article Knock Knock. Who’s There? Opendoor. Chamath Just SPAC’d The Amazon Of Housing

What do IPOB Shareholders Actually Own?

The question that led me to write this article is about valuation: what do IPOB shareholders actually own? There are numerous articles that indicate the deal values Opendoor at $4.8B, but I could not find any articles that explain the actual terms of the deal that would indicate the actual ownership details of the post-transaction Opendoor company. In this article I will review the key terms of the transaction and assess the attractiveness of the deal from a valuation perspective. 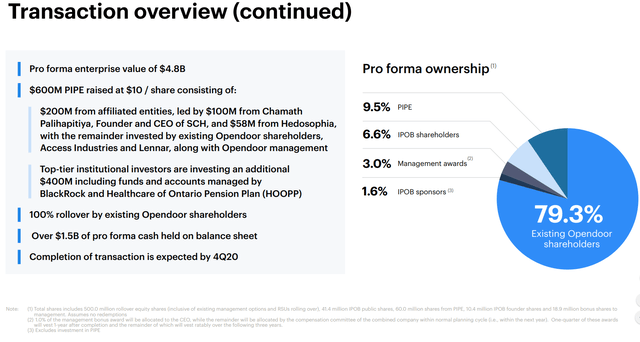 Having established the post-transaction market cap, the next question is how to determine relative valuation? As is typical for early-stage high growth companies, Opendoor is unprofitable and therefore cannot be valued on an earnings basis. As seen in its financial summary, Opendoor expects to grow revenue at a rate above 40% YoY for the next 3 years and expects to first be profitable on an adjusted EBITDA basis in 2023. 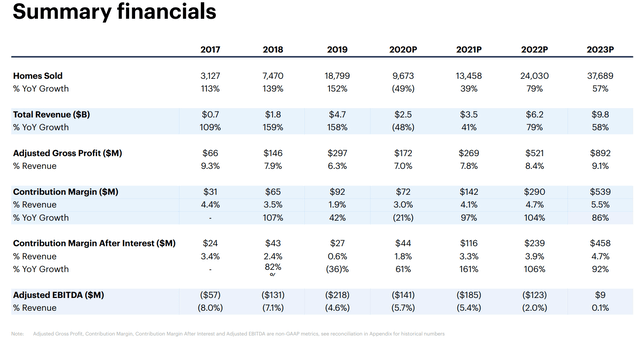 For valuation purposes, given that Opendoor is in the business of flipping houses, it also does not seem appropriate to determine valuation on a revenue basis. This is because margins are expected to be very low given that cost of revenue is the initial purchase price of a house for every house that Opendoor sells. For this reason, I propose that Contribution Margin after Interest is the most relevant metric for valuation. This subtracts the costs of the initial purchase, remodeling, selling, holding, and interest costs associated with each home sale. Looking at 2022 estimates provided by Opendoor, Opendoor expects $6.2B in revenue, 58% fwd revenue growth, and 3.9% contribution margin after interest (CMAI) on a percentage-of-revenue basis. This gives a price to CMAI ratio of 48.

Price to CMAI is not a standard valuation metric to use, but it is reasonable to compare vs. the price to gross profit of other companies. One of the most notable features of Opendoor’s financials is the high anticipated future growth rates. However, to find companies with comparable growth rates, one must generally needs to look to the SaaS industry. The table below compares Opendoor with some other high growth companies in a similar valuation range. Note that here I am equating gross margin for the comparable companies with contribution margin after interest for Opendoor.

Comparison of Opendoor vs. other high growth companies with similar valuations on a price to gross profit basis.

The closest company on this list in terms of industry is Tesla (TSLA) since it has relatively low margins and is capital intense; the rest of the companies are high margin SaaS companies. Comparing vs. Tesla, Tesla has lower expected growth and a lower valuation on a price to gross profit basis. The closest company in terms of growth and valuation would be Snowflake (SNOW), which is faster growing and valued slightly higher. While these are all “apples and oranges” type comparisons, the bottom line is that Opendoor has a valuation that is consistent with some of the most expensive growth stocks after accounting for growth and profitability (on a gross profit basis).

Conclusion: Valuation is Comparable to the Most Expensive SaaS Companies

The high valuation is somewhat concerning given that (1) Opendoor is a much riskier business vs. SaaS given that it has risk associated with the cyclicality of the housing market, (2) is a capital intense low margin business, and (3) there are generally low barriers to entry to home flipping which may create strong competition. This competition can come in the form of direct competition from companies such as Zillow (ZG) and Redfin (RDFN) or “indirect” competition from local hope flippers who may have lower expectations for profitability and may also be subject to less regulatory scrutiny. While I think Opendoor will be successful as a company, these valuations are very concerning.

For these reasons I recommend waiting for lower valuations to initiate a position. A price around ~$13 would be in the reasonable range which would represent a valuation on a price per gross profit basis that is comparable to Tesla. While the valuation is comparable, Opendoor would have a higher growth rate which compensates for the additional risk to Opendoor’s business model compared to Tesla and the fact that Tesla is already a stock very expensive.

Disclosure: I am/we are long IPOB. I wrote this article myself, and it expresses my own opinions. I am not receiving compensation for it (other than from Seeking Alpha). I have no business relationship with any company whose stock is mentioned in this article.