In semiconductor testing, contactors can also be referred to as the specialized socket that connects the device under test.
In process industries, a contactor is a vessel where two streams interact, for example, air and liquid. See Gas-liquid contactor.

A contactor is an electrically-controlled switch used for switching an electrical power circuit.[1] A contactor is typically controlled by a circuit which has a much lower power level than the switched circuit, such as a 24-volt coil electromagnet controlling a 230-volt motor switch.

Unlike general-purpose relays, contactors are designed to be directly connected to high-current load devices. Relays tend to be of lower capacity and are usually designed for both normally closed and normally open applications. Devices switching more than 15 amperes or in circuits rated more than a few kilowatts are usually called contactors. Apart from optional auxiliary low-current contacts, contactors are almost exclusively fitted with normally open (“form A”) contacts. Unlike relays, contactors are designed with features to control and suppress the arc produced when interrupting heavy motor currents.

Contactors come in many forms with varying capacities and features. Unlike a circuit breaker, a contactor is not intended to interrupt a short circuit current. Contactors range from those having a breaking current of several amperes to thousands of amperes and 24 V DC to many kilovolts. The physical size of contactors ranges from a device small enough to pick up with one hand, to large devices approximately a meter (yard) on a side. 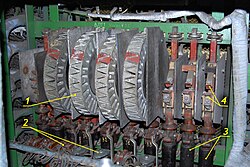 Magnetic blowouts use blowout coils to lengthen and move the electric arc. These are especially useful in DC power circuits. AC arcs have periods of low current, during which the arc can be extinguished with relative ease, but DC arcs have continuous high current, so blowing them out requires the arc to be stretched further than an AC arc of the same current. The magnetic blowouts in the pictured Albright contactor (which is designed for DC currents) more than double the current the contactor can break, increasing it from 600 A to 1,500 A.

A basic contactor will have a coil input (which may be driven by either an AC or DC supply depending on the contactor design). Universal coils (driven by AC as well as DC) are also available in the market today.[2] The coil may be energized at the same voltage as a motor the contactor is controlling, or may be separately controlled with a lower coil voltage better suited to control by programmable controllers and lower-voltage pilot devices. Certain contactors have series coils connected in the motor circuit; these are used, for example, for automatic acceleration control, where the next stage of resistance is not cut out until the motor current has dropped.[3]

For contactors energized with alternating current, a small part of the core is surrounded with a shading coil, which slightly delays the magnetic flux in the core. The effect is to average out the alternating pull of the magnetic field and so prevent the core from buzzing at twice line frequency.

Because arcing and consequent damage occurs just as the contacts are opening or closing, contactors are designed to open and close very rapidly; there is often an internal tipping point mechanism to ensure rapid action.

Rapid closing can, however, lead to increase contact bounce which causes additional unwanted open-close cycles. One solution is to have bifurcated contacts to minimize contact bounce; two contacts designed to close simultaneously, but bounce at different times so the circuit will not be briefly disconnected and cause an arc.

A slight variant has multiple contacts designed to engage in rapid succession. The first to make contact and last to break will experience the greatest contact wear and will form a high-resistance connection that would cause excessive heating inside the contactor. However, in doing so, it will protect the primary contact from arcing, so a low contact resistance will be established a millisecond later. This technique is only effective if the contactors disengage in reverse order that they engaged. Otherwise the damaging effect of arcing will be split evenly across both contactors.[citation needed]

Another technique for improving the life of contactors is contact wipe; the contacts move past each other after initial contact in order to wipe off any contamination.

Without adequate contact protection, the occurrence of electric current arcing causes significant degradation of the contacts, which suffer significant damage. An electrical arc occurs between the two contact points (electrodes) when they transition from a closed to an open (break arc) or from an open to a closed (make arc). The break arc is typically more energetic and thus more destructive.[4]

The heat developed by the resulting electrical arc is very high, ultimately causing the metal on the contact to migrate with the current. The extremely high temperature of the arc (tens of thousands of degrees Celsius) cracks the surrounding gas molecules creating ozone, carbon monoxide, and other compounds. The arc energy slowly destroys the contact metal, causing some material to escape into the air as fine particulate matter. This activity causes the material in the contacts to degrade over time, ultimately resulting in device failure. For example, a properly applied contactor will have a life span of 10,000 to 100,000 operations when run under power; which is significantly less than the mechanical (non-powered) life of the same device which can be in excess of 20 million operations.[5]

Most motor control contactors at low voltages (600 volts and less) are air break contactors; air at atmospheric pressure surrounds the contacts and extinguishes the arc when interrupting the circuit. Modern medium-voltage AC motor controllers use vacuum contactors. High voltage AC contactors (greater than 1,000 volts) may use vacuum or an inert gas around the contacts. High voltage DC contactors (greater than 600 V) still rely on air within specially designed arc-chutes to break the arc energy. High-voltage electric locomotives may be isolated from their overhead supply by roof-mounted circuit breakers actuated by compressed air; the same air supply may be used to “blow out” any arc that forms.[6][7]

The current rating of the contactor depends on utilization category. Example IEC categories in standard 60947 are described as:

Relays and auxiliary contact blocks are rated according to IEC 60947-5-1.

NEMA contactors for low-voltage motors (less than 1,000 volts) are rated according to NEMA size, which gives a maximum continuous current rating and a rating by horsepower for attached induction motors. NEMA standard contactor sizes are designated 00, 0, 1, 2, 3 to 9.

The horsepower ratings are based on voltage and on typical induction motor characteristics and duty cycle as stated in NEMA standard ICS2. Exceptional duty cycles or specialized motor types may require a different NEMA starter size than the nominal rating. Manufacturer’s literature is used to guide selection for non-motor loads, for example, incandescent lighting or power factor correction capacitors. Contactors for medium-voltage motors (greater than 1,000 volts) are rated by voltage and current capacity.

Auxiliary contacts of contactors are used in control circuits and are rated with NEMA contact ratings for the pilot circuit duty required. Normally these contacts are not used in motor circuits. The nomenclature is a letter followed by a three-digit number, the letter designates the current rating of the contacts and the current type (i.e., AC or DC) and the number designates the maximum voltage design values.[9]

Contactors are often used to provide central control of large lighting installations, such as an office building or retail building. To reduce power consumption in the contactor coils, latching contactors are used, which have two operating coils. One coil, momentarily energized, closes the power circuit contacts, which are then mechanically held closed; the second coil opens the contacts.

A magnetic starter is a device designed to provide power to electric motors. It includes a contactor as an essential component, while also providing power-cutoff, under-voltage, and overload protection.

Vacuum contactors are only applicable for use in AC systems. The AC arc generated upon opening of the contacts will self-extinguish at the zero-crossing of the current waveform, with the vacuum preventing a re-strike of the arc across the open contacts. Vacuum contactors are therefore very efficient at disrupting the energy of an electric arc and are used when relatively fast switching is required, as the maximum break time is determined by the periodicity of the AC waveform. In the case of 60 Hz power (North American standard), the power will discontinue within 1/120 or 0.008333 of a second.

A mercury relay, sometimes called a mercury displacement relay, or, mercury contactor, is a relay that uses the liquid metal mercury in an insulated sealed container as the switching element.

A mercury-wetted relay is a form of relay, usually a reed relay, in which the contacts are wetted with mercury. These are not considered contactors because they are not intended for currents above 15 amps.

When a series of contactors is to be operated in sequence, this may be done by a camshaft instead of by individual electromagnets. The camshaft may be driven by an electric motor or a pneumatic cylinder. Before the advent of solid-state electronics, the camshaft system was commonly used for speed control in electric locomotives.[10]

Differences between a relay and a contactor[edit]

In addition to their current ratings and rating for motor circuit control, contactors often have other construction details not found in relays. Unlike lower-powered relays, contactors generally have special structures for arc-suppression to allow them to interrupt heavy currents, such as motor starting inrush current. Contactors usually have provision for installation of additional contact blocks, rated for pilot duty, used in motor control circuits.