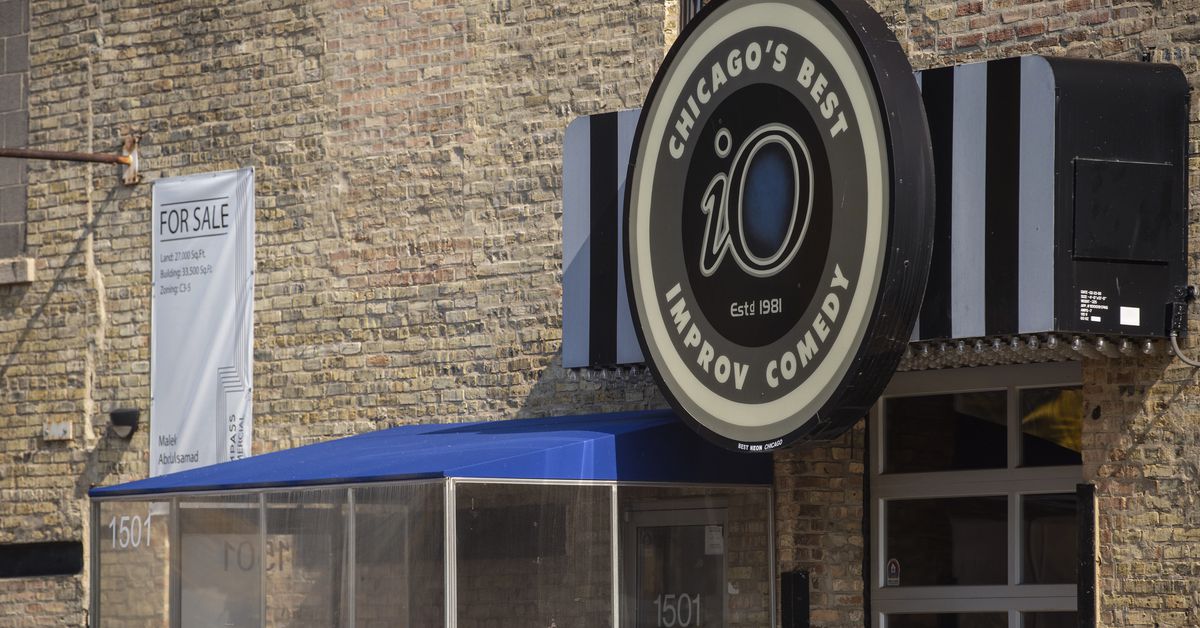 Chicago’s iconic iO Theater, the longtime comedy hub on the North Side, is officially for sale.

In June, Charna Halpern, owner and co-founder of the company formerly known as ImprovOlympic, told the Sun-Times the revenue loss brought on by the March mandated shutdown of all theaters (and other non-essential businesses in Illinois) was the deciding factor for what was a temporary shut-down at the time.

The property includes four theaters, seven classrooms and two event spaces. It is zoned for office use, retail or a combination (flex) of the two.

“I’ve been approached by several developers who want to demolish the building, rebuild it as a flex property and bring the theater back as well,” said Malek Abdulsamad, a real estate broker for Compass Commercial who is handling the sale.

“About 80% of the folks who’ve approached us have indicated they want to bring the theater back, to somehow preserve it.”

The asking price is in line with the current real estate market, Abdulsamad said, noting when Halpern purchased the site about 6 years ago, the area “wasn’t in a prime development location, and now it is. … As a theater, it is turn-key.”

Reached by phone Friday morning, Halpern said there has been a huge outpouring of support for the theater since it closed and a desire to see it return. More than 800 students participate each year in its training/education programs, administered by 25 to 30 instructors.

“The nice thing really is that the whole community, they don’t want iO to die,” Halpern said. “They want the theater to come back. I really hope the new owners will do that because it would be a huge loss for Chicago and for improv.”

Earlier this week, across town, The Second City announced the sale of its company.

Halpern and the theater were also the subjects of change.org petitions this summer alleging racism at the company and demanding changes, including “decentralizing theater decision-making, distribution of power more equitably especially with regards to BIPOC, and creating a more genuinely inclusive space for QBIPOC.” The petition also called for Halpern to “publicly acknowledge and apologize for the institutional racism perpetuated at iO as well as her individual history of racism.”

Halpern issued a statement at the time addressing the matter, and saying, in part, “I have been outraged at the police brutality and the violence against the Black Lives Matter movement. My heart breaks again to see and hear the experiences of BIPOC performers that have been uncomfortable, discriminated against, pained, and felt unheard at iO. As the owner of iO I must take responsibility for the failings in every department, and for my own failings. I am sorry.”

On Friday, Halpern said the decision to officially sell off the property was purely based on economics, primarily due to property tax deferments ending soon and a $100,000 tax bill coming due.

“I got really scared about the property tax,” she said. “I just couldn’t see where I could make that happen. I already paid $85,000 on the first installment earlier this year.”

But there was plenty of emotion involved, too.

“iO was a mecca for improv. We trained stars for ‘SNL’ and for Second City,” she said. “I worked 40 years to make improv a popular thing, to bring an unknown art form to popularity. So I’m hoping whoever buys this, and everything in the theater is included in the sale, from lightboards and sound equipment to seating, that they bring it all back. They could literally open the doors, turn on the lights and put on a show. It’s all there. It’s all ready to go.”