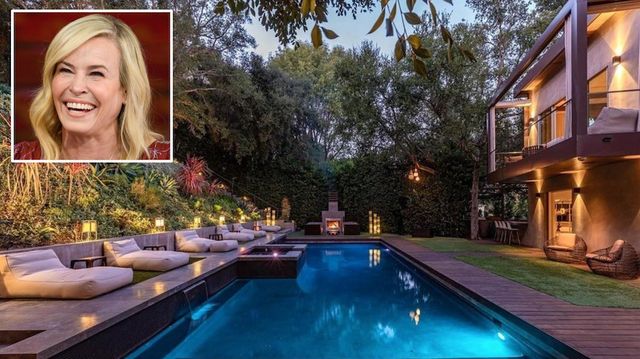 Handler turned the residence into a modern masterpiece, and has been trying to sell it since 2018, when it hit the market for $11.5 million. It’s been on and off the market at gradually reduced prices ever since.

The home has a spacious, airy feeling, thanks to multiple walls of glass that open up to the lush grounds.

The vibes of the gorgeous grounds match the Zen feeling of the house. There’s a meditation garden, as well as walking paths, a 50-foot pool, and plenty of entertaining space.

Spots for chilling out with friends include a separate fireplace in an open-air living room area, a full outdoor kitchen with a pizza oven, and myriad dining/conversation spaces.

The acre lot is set into a terraced hillside and covered with mature foliage, including vibrant succulents.

Indoor features include a loftlike great room with a living room and dining area that flows into a gourmet kitchen. The terrace just outside also has a grand dining space.

Another large terrace is accessible from the upstairs main suite, which includes a massive closet/dressing room, as well as a modern marble bathroom with an infrared sauna and a steam shower.

The five additional bedrooms each have special features of their own—one even has built-in bunk beds.

As befitting a celebrity, this is a very private property, set behind attractive modern gates that guard a long driveway lined with vegetation.

Handler, 45, has worn many hats during her successful career, including those of comedian, actress, author, producer, and activist. She is perhaps best known as a talk-show host, on shows including the E! cable channel’s “Chelsea Lately” and “Chelsea” on Netflix.