Boston Scientific Corporation BSX signed an investment agreement with an exclusive option to acquire Farapulse, Inc, a privately-held company developing a pulsed field ablation (“PFA”) system. The agreement has been signed to enhance the treatment of atrial fibrillation (“AF”) and other cardiac arrhythmias.

The Farapulse platform, which is an investigational device not available for sale, uses an ablation method based on pulsed electric fields (also known as irreversible electroporation) to regularize the electrical signals and prevent AF.

For investors’ note, Farapulse is pursuing regulatory approval in the United States and CE Mark approval in Europe. It has also received the FDA’s Breakthrough Designation for its endocardial ablation system in May 2019.

Rationale Behind the Agreement

However, the Farapulse platform via the PFA system enables the physicians to only ablate the required tissue and spare nearby tissue from unintentional ablation. The PFA system creates a therapeutic electric field instead of using thermal energy sources such as radiofrequency ablation or cryoablation.

Per Boston Scientific’s management, the expanded investment in this technology along with its cryoablation and contact force catheters with local impedance technology will offer physicians an innovative and comprehensive portfolio of electrophysiology products as well as services.

Per a report by ReportLinker, the global cardiac ablation market is expected to grow from $1,633.8 million in 2019 to $3,482.39 million by the end of 2025, witnessing a CAGR of approximately 13.4%. Rising cases of cardiovascular disease, growing demand for minimally invasive technology and higher awareness for effective treatment alternatives are expected to drive the market.

Given the market potential, Boston Scientific’s investment in the PFA technology will significantly boost its business.

Of late, Boston Scientific witnessed some important developments in its Rhythm and Neuro segment.

The company announced the receipt of the CE Mark and the subsequent limited-market launch of its fourth-generation Vercise Genus Deep Brain Stimulation System in Europe this month.

In June, the company announced the U.S. launch of its tool for monitoring the effect of radiofrequency energy delivery, the DIRECTSENSE Technology. The launch was preceded by its FDA approval in April. This launch is expected to provide a significant boost to the company’s Electrophysiology business, which is a segment of the broader Rhythm and Neuro arm.

In May, Boston Scientific announced the final results from the UNTOUCHED study of the EMBLEM Subcutaneous Implantable Defibrillator System. 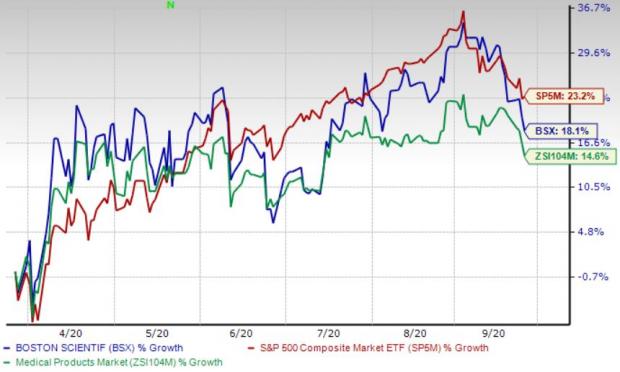 Biggest Tech Breakthrough in a Generation

Be among the early investors in the new type of device that experts say could impact society as much as the discovery of electricity. Current technology will soon be outdated and replaced by these new devices. In the process, it’s expected to create 22 million jobs and generate $12.3 trillion in activity.

A select few stocks could skyrocket the most as rollout accelerates for this new tech. Early investors could see gains similar to buying Microsoft in the 1990s. Zacks’ just-released special report reveals 8 stocks to watch. The report is only available for a limited time.