Housing is a long leading indicator for the economy overall; i.e., it typically peaks over a year before the economy does as a whole, and is also usually one of the first sectors to rebound during a recession.

1. They are the most leading of all the housing metrics.

2. They are also the most volatile of all the housing metrics, and are subject to large revisions.

Both of those facts are especially important when considering Thursday morning’s report.

First, the raw data: in August 1.011 million new homes were sold on an annualized basis. That is the highest number in almost 15 years! July was also revised *higher* to 965,000, which becomes the second-highest number in over a decade (blue in the graph below). In the below graphs, I also include single-family housing permits (red), which as you can see are much less volatile (and also less volatile than any other measure of starts or permits), but in the longer view tend to peak or trough a little after new home sales. I’ve also included new residential construction spending (gold), which is the least volatile of all housing measures, but also less leading.

Here is the long-term view for the 27+ years that all three data series have been in existence:

Here is the close-up of the past 5 years:

Note that, like new home sales, single-family permits also made a 10-year+ high in August. In other words, the surge in new home sales, while subject to considerable revision, almost certainly is a signal and not a noise. August residential construction spending hasn’t been reported yet, but can be expected also to increase.

Finally, although they are much less of an important economic indicator, the 10 year+ high in *existing* home sales, reported several days ago (h/t Bill McBride) also confirms that the housing sector has been surging. 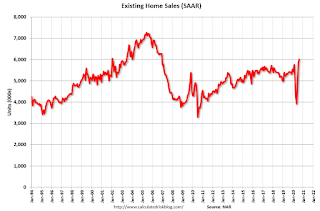 As noted above, the big increase in housing sales and construction in the past few months was very predictable based on the new 50 year+ lows in mortgage rates, and is a genuine signal, even if there are revisions.

This will feed through into increased construction spending, increased income for those in those trades, and ultimately increased consumer spending on new housing-related purchases, all good things for the economy over the next 12 to 18 months.

Disclosure: I/we have no positions in any stocks mentioned, and no plans to initiate any positions within the next 72 hours. I wrote this article myself, and it expresses my own opinions. I am not receiving compensation for it (other than from Seeking Alpha). I have no business relationship with any company whose stock is mentioned in this article.