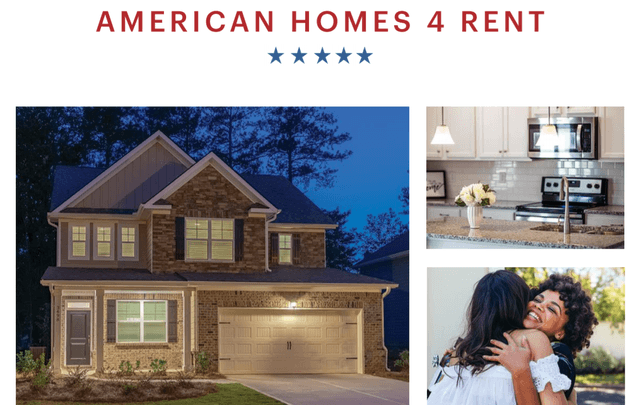 Towards the end of June, I penned a piece on residential rental REIT American Homes 4 Rent (AMH) stating I thought the stock was a sell. Shares are up marginally since then, so my bearishness seems to have been overdone given the way the stock has performed. However, that is a long way from making the stock a buy, and below, I’ll detail why I still think AMH is a waste of your time and investing dollars. 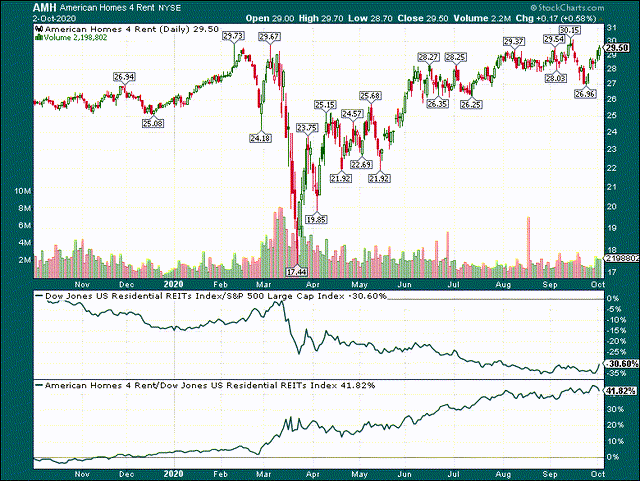 Shares have been resilient since June, as I said, and as you can see above. We aren’t talking about blockbuster gains here – a dollar or two per share – but to its credit, AMH is holding up. What’s interesting is that its peer group has performed absolutely horrendously this year, underperforming the S&P 500 by about 30% since the March bottom. AMH has vastly outperformed its peer group, however, which is great, but buying stocks in one of the worst-performing groups isn’t something I plan on doing a lot of. I want to own strong stocks in strong groups, and while AMH is the former, it certainly isn’t the latter. Outperforming a terrible benchmark doesn’t make a stock a buy.

AMH has managed to boost its revenue each year since coming public, which is something that many REITs cannot say. That’s fine, but it simply hasn’t translated to FFO-per-share growth in the way that the valuation suggests it should.

This sort of revenue growth, on the surface, looks impressive. After all, AMH has taken a fairly new model in the REIT world – a sector which doesn’t see a lot of innovation – and has scaled it over the past several years. Top line growth is one thing, but I still think AMH is exposed to what could be a prolonged period of unemployment. The trust says the majority of its renters are dual-income earners, so that provides at least some insulation against renters missing their payments. However, I think some recent data provided by the trust shows exactly what I’m afraid of with AMH. 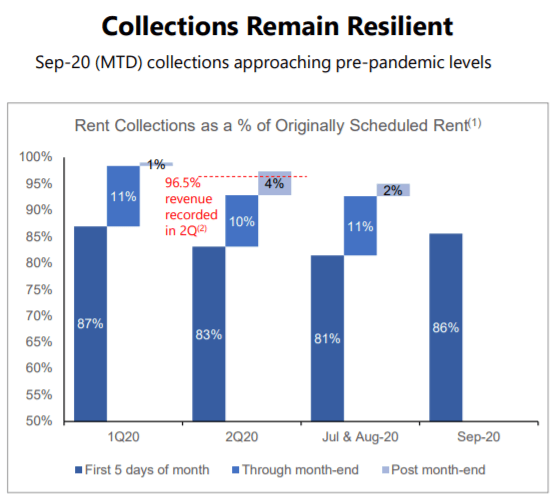 On-time rent collections fell meaningfully in the second quarter, and into July and August, as consumers found it increasingly difficult to make rent payments. This makes total sense given unemployment spiked and stimulus checks ran out. While September apparently was off to a better start than prior months, this is the exposure AMH has to economic weakness.

Should this period of elevated unemployment last, I think AMH will find it increasingly difficult for its tenants to maintain their pre-crisis ability to make rent. I’m not suggesting the model will collapse or something like that, but I am suggesting that the stock is essentially pricing out any risk of a relapse in late payments. However, the data above – from AMH itself – suggests that this ignoring of risk seems imprudent.

Next, there is the matter of nearly-constant dilution the trust engages in, raising the bar for FFO per share as the denominator in that equation continues to rise. 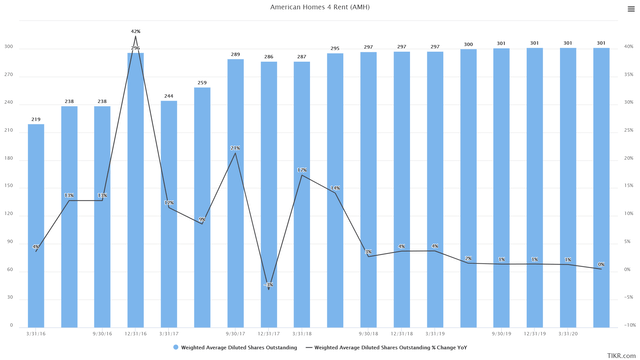 AMH had been better in recent quarters about issuing stock, but that came to an end in mid-August when the trust issued 13M+ new shares. That’s good for about 4% dilution, so any FFO per share targets that existing prior to that had to come down ~4%. That’s the problem with dilution; over time, higher share counts make it more difficult to not only grow FFO per share, but paying the dividend becomes more costly as well since there are more shares to pay the dividend to. While this practice is common among REITs, it doesn’t make it any less impactful.

I also think the fact that AMH opts to issue common shares rather than preferred stock, long-term debt or some other equivalent is telling because it must see the stock as favorably priced for such issuances, or it would choose something else. Whenever a company/trust is issuing stock to raise capital, that should raise a flag to investors to understand why. In this case, the trust feels it is getting good value for selling shares, which must mean that the stock is at least somewhat overpriced, or AMH would presumably issue debt and/or preferred stock instead.

Unattractive valuation and yield mean AMH should still be avoided

AMH’s bear case hasn’t played out, and I’ll own the fact that the summer went better for AMH than I thought it would. However, I still think the rent collection data the trust provided offers a glimpse into exactly the sort of risk I think the market is ignoring. Indeed, with shares right back at pre-crisis highs, investors seem to have forgotten about COVID-19 and spiking unemployment altogether.

FFO is slated to be roughly flat this year on a per-share basis, followed by a bump into 2021. This, however, assumes no more dilution, and it assumes that there is no double-dip recession. AMH is still exposed to consumers that need their jobs to pay rent, and if this recession goes on for some time, that will almost certainly become an issue. I won’t attempt to predict the length of this recession, but 8% unemployment isn’t good for any landlord, and that includes AMH.

Shares are valued at 24+ times next year’s FFO per share, which is a full valuation to say the least for a trust with small amounts of FFO growth and a laughable yield. As I said, I think the stock is being priced as though there is no recessionary risk, which I find to be quite imprudent.

Speaking of the yield, AMH has perhaps one of the most uninspiring dividend payment histories I’ve run across in my time covering REITs.

Even during years of booming economic growth, AMH has managed to pay the same dividend every quarter. Part of the attraction of owning a REIT is the idea that your income will grow over time; AMH has made it quite clear it has no plans to do that.

That has resulted in the below, which makes AMH one of the most unattractive REITs in the entire market from an income perspective.

AMH’s yield is rivaling savings accounts at this point, meaning it is a very long way from an income stock. Given its propensity to never raise the dividend, it is certainly highly unlikely it will become an income stock anytime soon.

With this being the case, and the fact that the valuation looks extremely full, what is there to like? You have a stock that is in a very weak sector, has a diminutive yield and no dividend increases in sight, and a very full valuation. I’ll pass on this one.

Disclosure: I/we have no positions in any stocks mentioned, and no plans to initiate any positions within the next 72 hours. I wrote this article myself, and it expresses my own opinions. I am not receiving compensation for it (other than from Seeking Alpha). I have no business relationship with any company whose stock is mentioned in this article.