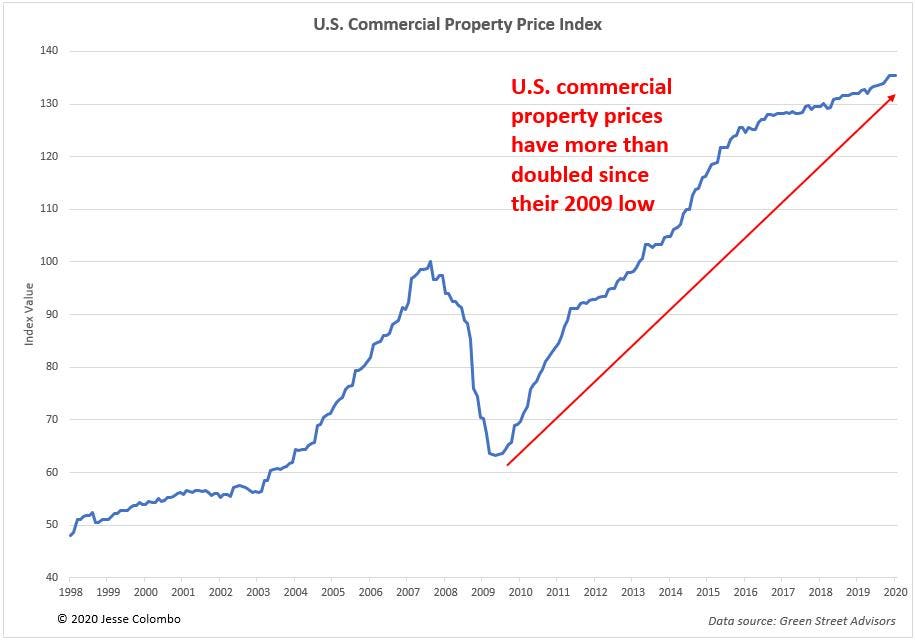 As a result of the Federal Reserve’s stimulative monetary policies, U.S. commercial property prices have more than doubled since their 2009 low:

Ultra-low interest rates encouraged a borrowing boom in which commercial real estate loans at U.S. banks surged by $863 billion or 62% since 2012:

U.S. commercial real estate prices bubbled up to the stratosphere on an ocean of cheap credit, but the coronavirus pandemic has created a perfect storm that is likely to cause this bubble to burst violently over the next couple years. Retail commercial real estate was already hanging by a thread due to the “retail apocalypse” that was occurring as tens of thousands of stores closed in recent years (with many more expected to close in the years ahead). With most stores being closed from mid-March until the foreseeable future, retailers are bleeding cash and many will go bankrupt as Neiman Marcus and J.Crew are expected to do very soon. According to Green Street Advisors, over 50% of department stores in malls will close by 2021.

Office space is another segment of the commercial real estate market that is about to take a severe hit after the coronavirus pandemic has made telecommuting the norm for office workers in a mere two months. The bursting of the tech startup bubble will also cause office vacancies to surge. Many more businesses will fail as a result of the powerful recession or even depression that has just begun. For example, JP Morgan sees the U.S. GDP plunging by an incredible 40% in the second quarter, along with 20% unemployment. Unfortunately, the frothy U.S. commercial real estate bubble is about to experience its day of reckoning as numerous factors conspire against it all at once.