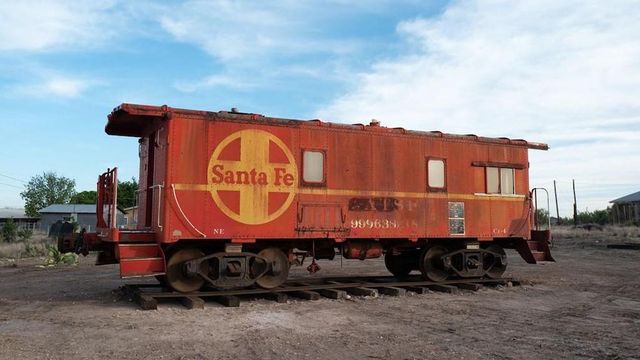 The tiny town of Marfa wasn’t always a hip area for artists. Before the migration of creative types to this small speck of desert in west Texas, Marfa was a train city with lines rumbling right through town.

Even today, “the train is such a presence in Marfa,” says Lauren Meader Fowlkes of Far West Texas Realty. She’s the listing agent for a decommissioned caboose now on the market for $285,000. “We’re a town built around the rail line.”

Now, in a fun nod to the town’s railroad history, this Santa Fe Railroad steel caboose seeks a new owner. Built in 1948 as one of three for the rail company, the caboose was pulled out of service in 1984. The train car weighs just shy of 60,000 pounds.

The current owner has owned the caboose for years.

“She bought it for her 40th birthday,” explains Meader Fowlkes. “They’ve had it in their backyard in Hamilton, TX, for all these years. Other than the Union Pacific, they are the second owner.”

They recently relocated it to Marfa, and are now ready to bid it a fond farewell.

“These train cars were built for someone to live in every day,” says Meader Fowlkes.

Wondering why there’s no cupola atop this particular caboose? There’s a reason: A cupola would have made passing through the tunnels on the Santa Mita rail line impossible.

What will need to be done to turn this caboose into a home?

While there’s a half-bath in the caboose, the stove was taken out of service, says Meader Fowlkes. “In order to live in this, you would need to do some upgrades to the plumbing, and add a shower.

“It’s truly a very robust structure,” she says, likening the caboose’s aesthetic to Marfa’s Crowley Theatre, which is located inside a former feed store.

“It’s deteriorated in a very attractive way,” says Meader Fowlkes, who adds that the buyer could either strip it down to the metal “Airstream-style” or retain its distressed and weathered exterior.

“Maybe this is a really fantastic office?” she suggests. Or perhaps a unique Airbnb listing?

“Our short-term rental market has maintained strong during the pandemic,” she adds.

And bonus for a buyer: The caboose sits on a double lot with room to build. So a buyer could erect an additional structure and keep the caboose for guest quarters, or relocate it altogether as the sellers just did.

“Lots of people use cabooses for the backyard. It would be possible to use this on another lot,” says Meader Fowlkes.

The post Train Car for Sale in Marfa, TX, Could Be a Cool Getaway Plan appeared first on Real Estate News & Insights | realtor.com®.