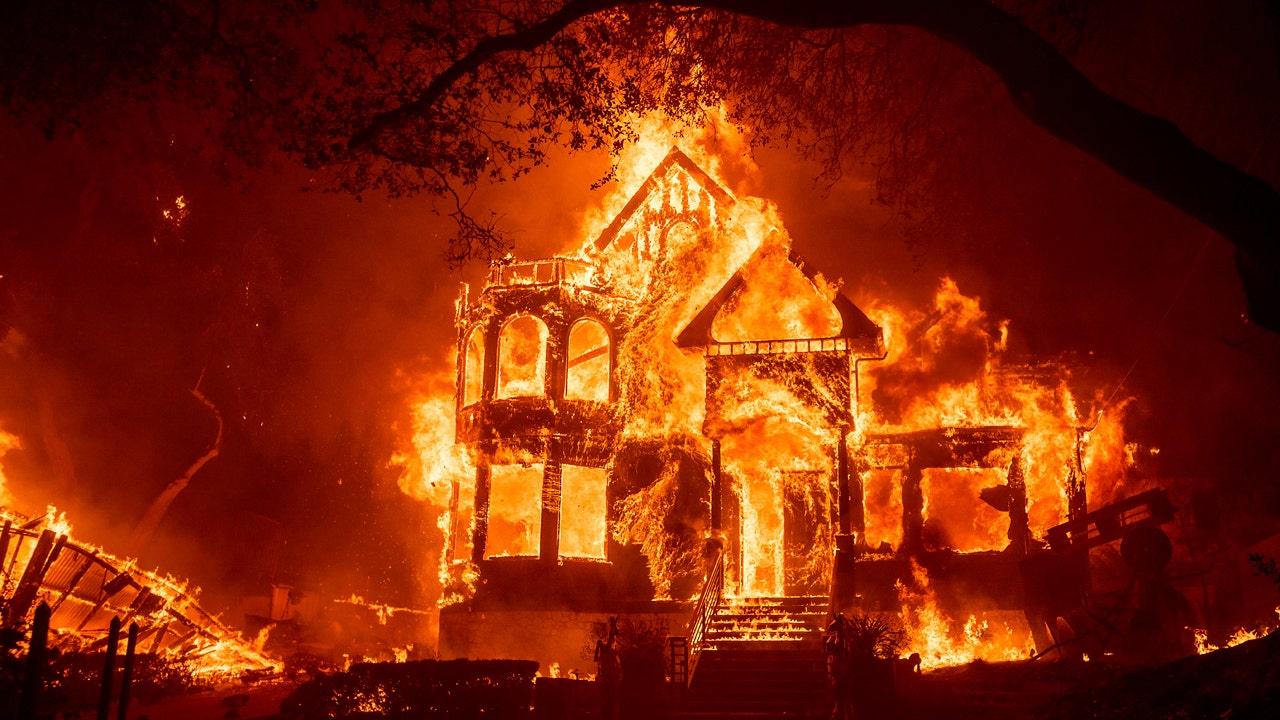 A firetruck travels on the Silverado Trail as a hillside goes up in flames during the Glass Fire in St. Helena, Calif., on Sunday, Sept. 27, 2020.
(Jose Carlos Fajardo/Bay Area News Group via AP)

“We woke up in the middle of the night and saw flames,” Jan Zakin of St. Helena told KGO-TV. “I was in my underwear, there was a car on fire blocking access out, my dog ran away, I still haven’t found her, we left with nothing, just literally with nothing. We’re so lucky to be alive.”

No injuries have been reported yet, but over,8,500 structures are threatened, according to Cal Fire.

Flames reached within a mile of the Adventist Health St. Helena hospital, where all 55 patients were safely evacuated by ambulance and helicopter over a five-hour period starting at 7 a.m. Sunday.

“We had ambulances lined up from all over the Bay area,” hospital spokeswoman Linda Williams told Reuters.

Trees burn in strong wind on the Silverado Trail as a hillside goes up in flames during the Glass Fire in St. Helena, Calif., on Sunday, Sept. 27, 2020.
(Jose Carlos Fajardo/Bay Area News Group via AP)

Evacuation orders stretched through both counties, with residents of some 600 homes ordered to leave and 1,400 placed on notice, according to Cal Fire. Some 5,000 people were impacted by the notices.

The Black Rock Inn in the small community of St. Helena and multiple homes in the city of Santa Rosa, the San Francisco Chronicle reported.

The 4,500-resident Oakmont senior community was among areas evacuated, along with residents of a senior home.

“It was scary and I didn’t expect it to be so close,” Oakmont resident Doris Tietze told the Chronicle.

Two fires in Sonoma County that broke out later Sunday were believed to have been unleashed by the Glass Fire, KTVU reported. Those have since merged with the main blaze.

“The fire has been at a dangerous rate of spread and has expanded into Sonoma County,” the agency said.

Neighborhoods in Santa Rosa were given evacuation warnings late Sunday by police as the Sonoma County Sheriff’s Office also said “there are multiple fires on Los Alamos Road and St Helena Road” that prompted other evacuation orders.

Satellite imagery showed how quickly the situation was deteriorating around Santa Rosa.

The Napa County Sheriff’s Office warned people who are evacuating the expanding Glass Fire should not wait until the “last second,” sharing a video of what deputies were experiencing on area roadways with flames on both sides of the road.

Sonoma County officials cautioned those under evacuation orders to calmly and quickly leave, adding that the mass evacuation was causing traffic jams in the area.

“Highway 12 westbound is gridlocked. Check with your neighbors to ensure they know about this order if you have time,” the sheriff’s office said. “First responders are going door to door to assist people.”

The blaze was also threatening California’s famed Napa Valley, with at least one winery destroyed.

Embers fly off burning trees on the Silverado Trail as a hillside goes up in flames during the Glass Fire in St. Helena, Calif., on Sunday, Sept. 27, 2020.
(Jose Carlos Fajardo/Bay Area News Group via AP)

Getty Photographer Justin Sullivan captured the blaze burning through the Chateau Boswell Winery and other structures along Silverado Trail in St Helena.

Susan Krausz, co-owner of Arkenstone Estate Vineyards in the Howell Mountain community of Angwin, told Reuters it would take days or weeks to assess the impact of the latest blaze on valley vintners.

“Most people have harvested,” she said but added, “Any time’s a bad time for a fire.”

Meanwhile, Calistoga Ranch, an Augberge resort, has reportedly burned down as Meadowood currently battles the fire.

The Zogg Fire has prompted evacuations for all areas south of South Fork Road and Zogg Mine Road and south along the Gas Point corridor, which includes all residents along Gas Point Road to Foster Drive, ABC10 reported.

The northern part of the state remains under a red flag warning, with low humidity and gusty winds threatening to fan the flames.

The state’s largest electric utility, Pacific Gas and Electric Company, said it was temporarily halting power to transmission lines in parts of 16 counties across northern and central California due to expected conditions that could lead to rapid wildfire spread.

Some 65,000 homes and businesses were impacted by the latest public safety power shutoff.